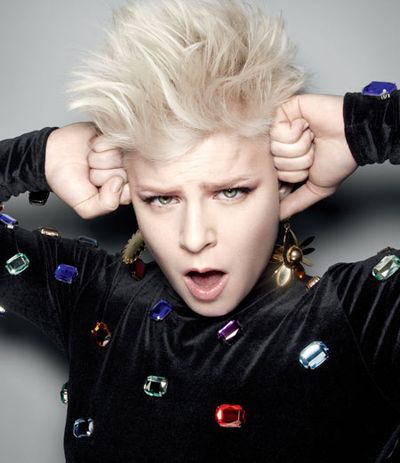 Today, Robyn has released her much-anticipated new album "Body Talk Pt. 1," which is the first part of three albums she plans to release this year. In an effort to satisfy to her creative urges, keep up with the appetite of fans and to address the ongoing changes in the music industry, Robyn figured it would make more sense to release a collection of songs in smaller doses as opposed to waiting for an entire record to be finished.

"Body Talk Pt. 1" delivers everything fans and critics had hoped for. It is a solid package of pop perfection that delivers more of her unique, cool sassiness, irresistible melodies, kicky dance beats and bittersweet sentiment that people everywhere can relate to. The Swedish singer is one of the very few pop artists who is able to excite both the high-brow pop elite and the entertainment mainstream with music that perfectly balances style and substance. No filler, no fluff.

The last time I met Robyn was when I was sitting in front of her at last year's GRAMMY Awards. She was up for an award in the Best Electronic/Dance Album category for "Robyn." The GRAMMY ended up going to Daft Punk, a very worthy winner, but Robyn remembered me leaning over to her during the ceremony and whispering that I was totally rooting for her right before the announcement of the winner. "I'm just excited to be nominated," she smiled back at me.

I caught up with Robyn again late last month via phone when she was on her way to the airport in Stockholm to jump on a flight to London for a promotional appearance. We had a chance to catch up and chat about "Body Talk Pt. 1," making great pop music, being a leading lady of pop and Lady Gaga.

Read the entire interview after the jump.

Are you excited about finally putting out some new songs after all of those years?
Absolutely. I was very ready to go back into the studio to start recording this album after touring for almost four years with the last one. Don't get me wrong. Touring was a lot of fun and I was getting so much love from fans - I really found my audience with the last album. But going back into the studio was a big priority for me. However, the idea of being in the studio for a year and then tour for another three years was really depressing to me. That's why I decided to switch that entire structure up a little bit and release the album in three parts. This new process is much more in line with my creative process and also allows me to tour, promote and record at the same time.

So you're still working on Part 2 and Part 3?
Yeah, I'm still in the studio while promoting this first album and rehearsing with the band for my summer tour. Believe me it is a lot of work and I've taken on quite a challenge but I'm really excited to see how this whole thing is going to roll out. In the end it is going to be so much easier for me, plus I stay connected with my fans in a more instant and intuitive way.

It seems like a win-win for you, the fans and your different labels. Was it easy to convince your labels to follow this new process?
That's a good question. It wasn't as difficult as I thought it could be. I was preparing for a bit of a battle, but it didn't turn out that way at all. I think the music industry is changing so much and artists are doing things in a very new way-  just releasing singles, just releasing EPs. The labels I work with are very open to new ideas and ways of doing things. If you think about it, it is a very logical way of doing things considering how people consume music these days and how fast the communications are. Also, the idea of having a short album with only 7 or 8 songs is not that strange. If you look 20-30 years ago, most album were that short.

When did you start your writing and recording for Part 1? Has it been years in the making?
Not at all actually. I have been spending a lot of time on the road for the past five years. I really was inspired to write while touring, but it was just too hard. There was no time to do anything. I didn't start to really focus on putting together "Body Talk Pt. 1" until July of last year.

This first album is filled with stories about learning, reflecting and looking back. A song like "Cry When You Get Older" seems to be one of those songs where you share with listeners a message of "been there, done that" when you sing for example, "love hurts, when you do it right."
Yeah. In fact, it is almost like I relived a moment back in time and advised myself on how to deal with it. There's this expression that says "youth is wasted on the young," and that really speaks to me. Looking back at my life, there are a lot of things that I would have done differently knowing what I know now. It's not a matter of having regrets, it is more a matter of growing up and being wiser now. There's an element of melancholy to that as well.  I wish sometimes I could go back in time and enjoy things more and not be so scared and worry about what people think. Really enjoy life and push it as far as I can.

Does "Don't Fucking Tell Me What To Do" refer to that same sentiment of wanting to live your life on your terms?
Yes, but in a different way. That song was really triggered by being on the road for so long and not having time to do anything. People are constantly in your face, but it is more about the situation of not getting the time to get anything finished than people telling me what to do.

You've said "Dancing On My Own" is about being sad on the dancefloor. A lot of your songs seem rooted in bittersweet sentiment.  Is that an emotion where you get a lot of your inspiration from?
I think so. I think that all memorable moments in life have a bittersweet quality. It is funny how that works. I think when you look back at your own life, you may find that the moments that stick out are not always the ones that are the most happy. I think  moments where you have been sad and happy at the same time are the most memorable. For me, the best of the pop music is definitely melancholic. "Dancing On My Own" though is not a song about a girl who is a victim. It is about a girl who is empowered, going out and letting off her steam. She's dramatic and living out how's she's feeling. She's very strong.

You collaborated with Diplo on "Dancehall Queen" that presents a very interesting new sonic direction for you. How do you go about selecting collaborators? What quality are you looking for?
A lot of collaborations I do come about organically. There's not one thing I can point too. The first meeting may be something that was set up for us, but when it comes to time in the studio it is all about the chemistry.

Can you reveal any of the other people you are working with for the next two albums?
I've been working a lot with Kleerup. We did "With Every Heartbeat" and I love working with him. Teddybears' Kras Ahlund is a really important partner for me. We will be doing a lot more in the future. Also, I've been spending time with Patrick Berger who produced "Dancing On My Own."  There may be more but at the moment that is all about I'm able to talk about.

Your music is respected and enjoyed across the wide pop spectrum - from the pop elite to the entertainment mainstream - from Pitchfork to Perez. What do you make of that?
I think it is because a lot of people connect to my music because it is real. That's how I approach everything I do, I make music and do things that are real and authentic.

It is a great time for females in pop with people like yourself, Rihanna, Lady Gaga and many others ruling the charts. What are your thoughts about the driving force of females in pop?
I really appreciate to be part of this moment in time when there are so many girls making pop music and making pop music in their own way. It makes music better, because it allows for diversity. Also, with so many girls doing their thing, it creates a bit of competition, which is good for music, but it also allows more creative space for females to express their own identity. It is a wonderful thing.

I asked my readers to submit questions for this interview on Facebook and Twitter, and a lot of your fans are very curious to hear your thoughts about Lady Gaga.
I do understand why people are wanting to know this because she's the most talked female artist at the moment. But I decided to not answer that question. It is always misinterpreted. As a female artist you always get questions about other girls. I'm not sure, but I don't think male artists get questions like that. We are always put in situations where we have to confront each other. There's space for everyone. I think what Lady Gaga is doing is amazing and I think she is super brave and interesting.