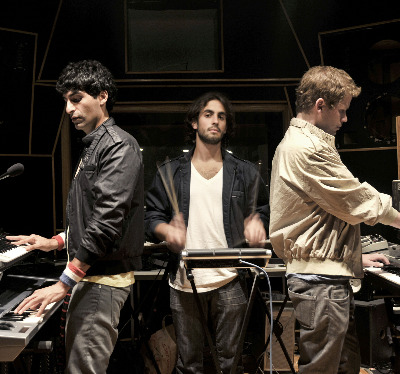 To celebrate the July 13th release of their debut album "Star," Chicago synth-pop trio Hey Champ are sharing their flashy disco pop remix of Erasure's Andy Bell's latest single "Call On Me" that is taken from his second solo album, "Non Stop." I'm excited that Bell continues to bring new music to fans, tireless as he is, but I think this is a great opportunity to introduce you to an exciting new act as well.

Hey Champ are Saam Hagshenas (vocals, guitar), Jonathan Marks (drums) and Pete Dougherty (synths). The three share an eclectic series of influences, ranging from classical music and jazz to the power-pop of hometown heroes Cheap Trick and the synth-heavy productions of Giorgio Moroder and Trevor Horn.

The group's biggest claim to fame to date is their dancefloor anthem "Cold Dust Girl," which came with a video that racked up over 250,000 views on YouTube. One of the early viewers was none other than fellow Chicagoan Lupe Fiasco. Impressed by what he heard and saw, he invited Hey Champ on a nationwide tour with him. Since then they have remixed songs for Mike Posner, Passion Pit, The Sounds and The Cool Kids, while working on cuts for their own full-length effort.

Get a taste of what they can do with this cool little remix of "Call On Me."