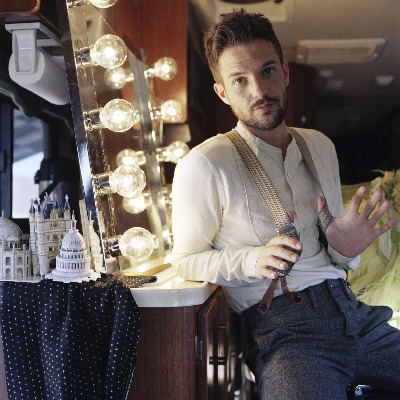 After his new single was finally revealed last week, there's more Brandon Flowers goodness to report this morning. His much-anticipated debut solo single "Crossfire" is being released on iTunes in the U.S. today and in other North American (digital) outlets next week.  (I'm hoping remixes will be available soon as well.)

But there's more. Photographer Lucy Hamblin has shot a collection of photos that will be used in the global promotion of Flowers' new LP "Flamingo." I pointed to some of those photos last week, but a few more surfaced over the weekend, including a glamerous, Las Vegas-styled shot of Flowers surrounded by Bally's Jubilee showgirls. Have a look at some of the new photos here.

Also, make sure to check out a lengthy new biography of Brandon Flowers that includes the singer's commentary about his new album including a description of album tracks. The singer also talks candidly about The Killers' sudden hiatus. Read the raw and unedited version of the biography after the jump.

Despite all its storied pitfalls, louche reputation and lascivious tourism campaigns, Brandon Flowers remains stubbornly proud of his hometown. The Las Vegas born-and-bred vocalist—whose working hours are usually spent with his band The Killers—makes that clear when discussing his first solo album, Flamingo, which takes its name from a Sin City downtown street on which Sam's Town is located, and where Flowers used to buy his records. "I grew up there, so it's close to my heart," the 29-year-old says. "I feel a responsibility to represent where I'm from, to defend it. It's a place that a lot of people loathe. I can't help but love it. I grew up with a lot of people who couldn't wait to leave, and that was always strange to me. I feel a real connection to it. It's in my blood."

Inextricably tied to Vegas in both showmanship and ideology, Flamingo is a bombastic 10-track collection of stadium-ready songs that runs the gamut from expert pop executions and forlorn electro dirges to gospel tunes and even blues-tinged rock (read: pedal steel, and plenty of it). "Jilted Lovers and Broken Hearts," an upbeat arena rocker with the heartbeat of a dancefloor classic, employs gambling as an epic metaphor: "I followed you through the darkness/ I followed you through the cold/ woman, I can tell you one thing/ you're going to wish you could go back and fold." Meanwhile "Welcome to Fabulous Las Vegas" doesn't make Las Vegas sound very fabulous at all.   Indeed, there’s also denial, perfidy, absolution, spirituality and the limits of faith—each of which is explored in the album's other 10 tracks. Flowers transforms intellectual concepts into adrenaline overdrive on "Crossfire"; channels Roy Orbison's luminous falsetto to unnerving effect in "Playing With Fire"; and looks for second chances on "Only the Young," in which he offers the following haunting prayer: "Redemption, keep my covers clean tonight."

Flowers wrote the songs on Flamingo over the year and a half he spent touring for Day and Age, the Killers' third, critically acclaimed studio album. (He says the song that served as a catalyst for Flamingo is called "O, Sad American Night," which was recorded during sessions for Day and Age but didn't make the cut for that album, and won't be released on this record, either.) Originally, he'd meant them as material for the band, but circumstances—like being on the road for six years—intervened. "I would prefer if this was a Killers record, although it would obviously be very different if I'd made it with the band," he says. "We're just at different places in our lives right now. It's no secret that they're ready to put the brakes on for a second. It's definitely not the end of the Killers, but you can't blame them—we've been going nonstop since 2003.”  The upside to recording the album alone was that without the other members of the Killers, Flowers could call the shots himself; the downside, as he explains, is that he feels "a little bit naked."

He hedged his bets, enlisting production help from a series of renowned talents: Daniel Lanois, Brendan O'Brien and Stuart Price. (Flowers worked with Price before on Day and Age). He also invited Rilo Kiley frontwoman Jenny Lewis, whom he calls "a daughter of Vegas," to guest on the song "Hard Enough." Together they made an album Flowers says he's proud of, one that stretches his musical horizons. And with plans for a fall tour of small venues are already in the works, Flowers isn't about to rest on his laurels. He enjoys performing, and even if he's worried about taking time off, he explains that he's now seasoned enough as a vocalist to understand that one of his biggest issues is an anxiety of influence.

"I looked up to so many people who had danced and rocked and made history on those stages," he says. "It was unbelievable to me that I was going on some of these same stages and that I was following in their footsteps. It took me a long time to get used to that. It's not that I think that I'm as good as everybody else. It's more that now I can let myself believe that it's possible, and that I can give myself a shot."