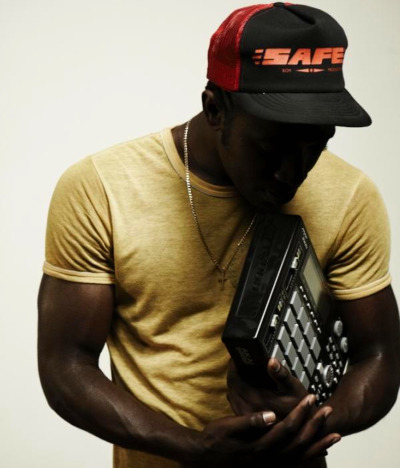 Bloc Party's singer/guitarist Kele Okereke has not only been hitting the gym to bulk up, but also the studio to crank out a solo project that takes him into a whole new musical direction. After the crunchy alt-pop of Bloc Party, a solo Kele presents a much dancier, electro-edged sound. After opening up about his sexuality in 2007 and publicly coming out in Butt Magazine earlier this year, Kele clearly liberated some of his musical interests as well.

On June 22, Kele will be releasing his debut LP "The Boxer" that was produced by Brooklyn's  XXXchange (Spank Rock, The Kills) with additional mixing by Philippe Zdar (responsible for Phoenix’s Wolfgang Amadeus Phoenix).

While taking time off from Bloc Party, Kele took the opportunity to book his own studio time to explore new sounds, “I plugged in synths with no idea what they would do. It was completely back to the drawing board.  It was exciting and terrifying," he explains in a press release. “The key for the sound of the record was to take things as harsh and as physical as I could make them. These are the sounds that make me happiest in the world."

The album’s massive first single “Tenderoni" triumphantly introduces Kele's new sound, featuring a dark clipping synth propelled by a dance beat that catches fire with Kele’s signature vocals on the chorus. Check out the brand-new video video for the song below to get a taste what Kele's new sound is all about.