Listen to Hurts "Better Than Love" 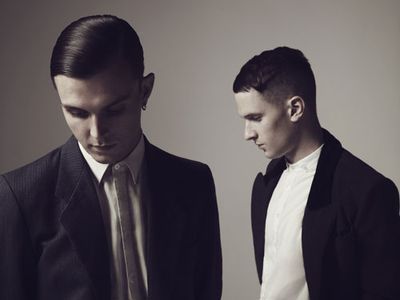 Hurts is all kinds of brilliant.

I alerted you last year about the British duo of Theo Hutchcraft (vocals) and Adam Anderson (synths/guitar) when their '80s throwback tune "Wonderful Life" first surfaced.

Their sparkly new single, titled "Better Than Love," also features a sound that is retro in its origin, yet forward in its execution. Drenched in classic new wave and atmospheric synth pop, Hurts totally reminds of the style and sounds of new romantics like Spandau Ballet, Human League and Visage.  "Better Than Love" tones down the doomy gloomy sensibilities of "Wonderful Life" and shows off Hurts' optimistic side with its larger than life lyrics and glistening crescendos towards the end of the song. It's fingerlickin' good.

In an interview with Manchester City Life, the group explains that their sound can be described as "disco lento" (slow disco). It is a style of '80s pop that surfaced in the wake of italo disco when artists starting to make ballads using the same production stylings.

This new track is getting a major push in the U.K. And deservedly so. The video for the song will premier April 26 and is followed by the official single release on May 24. What do you think of this new Hurt single?