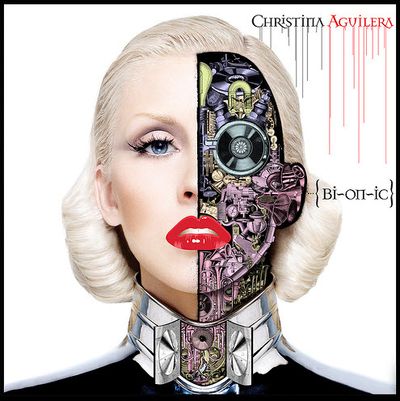 Straight from today's press release: "(New York – NY– March 25, 2010) -  With 30 million albums sold worldwide and the prestigious honor of being the only artist under the age of 30 included in Rolling Stone Magazine’s list of the 100 greatest singers of all time, 5 time Grammy Award winner Christina Aguilera has already achieved an unprecedented level of success. Aguilera’s been hard at work in the studio for the past year and is pleased to announce the release of her highly anticipated 4th studio album Bionic (RCA Records) this summer. The first single from Bionic is the fiercely energetic anthem “Not Myself Tonight”, produced by Polow Da Don. The song will premiere on ChristinaAguilera.com at 6pm EDT on 3/30, impacts radio on 4/5 and will be available on iTunes on 4/13


Bionic features songs co-written by Aguilera along with her much buzzed about collaborations including Sia, Tricky Stewart, Polow Da Don, Le Tigre, Hill & Switch, and Ladytron among others. Aguilera notes, “Working on this album with so many talented artists and producers that I admire was really an amazing experience. The artists I chose to work with added so many unique sonic layers to Bionic.  My intention was to step into their world and what they do combined with my own vision and sound. The results were magic.”  The album also features a ballad produced and written by Linda Perry titled “Lift Me Up”. The title Bionic reflects Aguilera’s ability to take her range to new levels and use her voice in various ways never heard before.

Aguilera describes the album as a unique mix of many genres and styles of music, “I was able to explore and create a fresh, sexy feel using both electronic and organic elements with subject matter ranging from playful to introspective.  I am so excited for my fans to hear the new sound. It is something I don’t think anyone will expect.”In addition to completing the album which was all recorded from her home studio after the birth of her first son, Christina also completed production on her first film, “Burlesque.” The film, which co-stars Cher, Stanley Tucci, and Kristen Bell will be released by ScreenGems this fall."