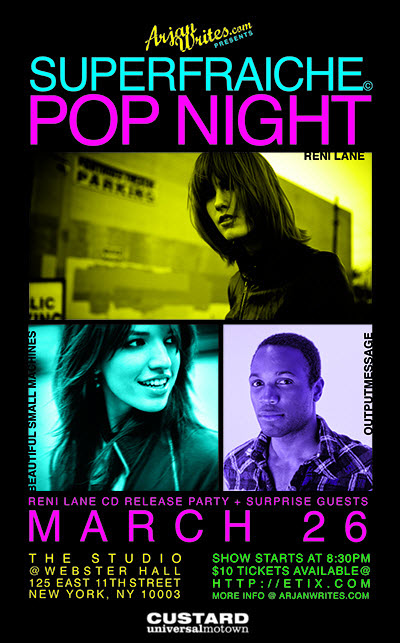 Exciting news! After the sold out out show at Spaceland in Los Angeles during GRAMMY Week, my Superfraiche Pop Night will return to New York City on March 26. Featured performers are Reni Lane, Beautiful Small Machines and Outputmessage.

It will be an exciting night of sweet and crunchy pop, running the gamut between hooky pop rock to sleek synth-pop.The night will also celebrate the release of Reni Lane's debut CD "Ready" (out on Custard/Universal Motown next week).

Superfraiche will held at The Studio at Webster Hall on March 26. Show starts at 8:30 pm. Get your tickets right here. Below more information about each of the artists that will perform:

Reni Lane – Signed by super producer Linda Perry to her Custard/Universal Motown label, this spunky and super fun singer is stirring up crowds with her debut single “Place For Us,” an infectious slice of alt pop rock. VH1 selected the track as the theme of their saucy new hit series Secrets of Aspen. Her major label debut “Ready” drops March 16. (web site)

Beautiful Small Machines – Recently teaming with Duran Duran's Simon Le Bon, Beautiful Small Machines may be synthetic, but they’re not stupid. Caught somewhere between the '70s, '80s and deep space, this electro-pop duo (Bree Sharp, Don DiLego) learned about comedy from adult swim and heartache from Philip K. Dick and they’re spewing it all back out at you like a bunch of mandroids on whiskey and psycho-pharmaceuticals. Fun, Sad, Creepy and Clever – Beautiful Small Machines is the retro-future.(web site)