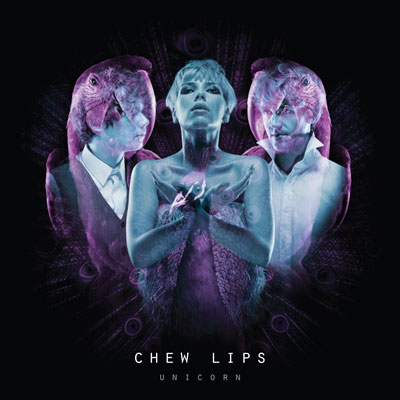 British electro-pop trio Chew Lips released their highly anticipated debut album, "Unicorn" back in January. The group is the teaming of Tigs (vocals), James Watkins (bass, synths) and Will Sanderson (guitar, synths) who bonded together late 2008 in London sharing love for everything electro.

"Unicorn" was produced by Dave Kosten who mostly known for his leading production work on Bat for Lashes' "Two Suns." The album is a fresh, off-kilter take on electro-pop that is packed with indelible synth melodies, hip-swiveling rhythms and Tig's glacial vocals that echo the vocals of Kylie and Allison Goldfrapp, but are uniquely hers. The sound on "Unicorn" is "pop music with fangs," as the group likes to describe it.

First single taken from "Unicorn" is the instantly catchy "Seven," which is a flawless slice of electro-pop that will give you a good taste of what Chew Lips is all about. Call it minimal dance-pop or edgy electronica, I'm confident it will make you want some more.