arjanwrites.com: Free MP3 Download: 2AM Club "Worry About You" 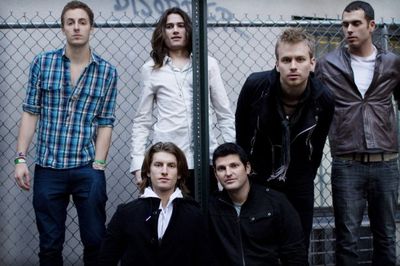 If the summer of 2009 was marked by the break out success of Cobra Starship, then I won't be surprised if the summer of 2010 is going to be all about 2AM Club who bring an equal amount of excitement to the scene. Combining solid songwriting with a cheeky sense of humor, this genre-mashing pop outfit is on the tipping point with dynamite material that is about to catch fire.

2AM Club is the teaming of singer Marc Griffin, emcee Tyler Cordy, guitarist Matt Reagan, keyboard player Dave Dalton, drummer Ian O’Neill and bassist Matt Warshauer. The group originated in Los Angeles where they stirred up a steady buzz with their crazy fun live shows, playing the local college scene up and down the West coast.

RCA/Jive took notice and signed the band to their roster of artists. Together with hit makers Sam Hollander and Dave Katz (Boys Like Girls, Katy Perry, Gym Class Heroes), this cool bunch have been working on material for their debut album. The group's music is an infectious mash of pop that is best described as Maroon 5 meets D'Angelo meets New Edition.

It is perfect fare for today's iPod generation who like their playlists familiar and fresh.

At the surface it may seem the group is just having fun with their music, but they have a clear vision in mind for their own brand of pop. "Pop music has been made for so long, a lot of it has obviously become cliché and hackneyed,” Tyler says. “We’re hoping that if we can make it a little bit smarter, we can take it somewhere new and cool and exciting."

Download a totally guilt-free MP3 of "Worry About You" to get a taste of 2AM Club. If you like what you hear, make sure to also check out "Noboy's In Love" on iTunes.

2AM Club "Worry About You"