arjanwrites.com: Report from the GRAMMYs: Celebrating Music & Television at Cue The Music

Report from the GRAMMYs: Celebrating Music & Television at Cue The Music 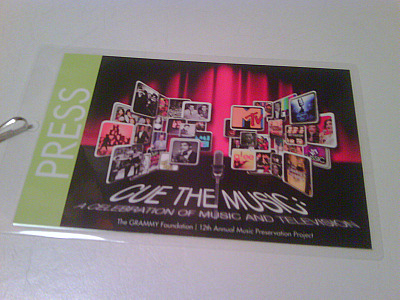 Tonight, I was a guest of The Recording Academy at the 12th annual GRAMMY Foundation Music Preservation Project at the historic Wilshire Ebell Theatre. The theme of this year's event was Cue The Music, which was all about celebrating music and televison.

The night featured several performances that were introduced by classic television music moments - from legendary variety shows to classic TV theme songs, and from popular singing contests to music made famous by TV shows.

The performances were truly top-notch. A flirty Colbie Callait and a very soulful Jason Mraz sang Tom Jones' "It's Not Unusual" and Sonny and Cher's "I Got You Babe." Train's Pat Monohan reminded the audience of music insiders about the game-chancing role of MTV played in the early '80s, and performed a rocked up version of "Video Killed The Radio Star."

Soul vocalist Melanie Fiona covered Kermit the Frog's "The Rainbow Connection" that was absolutely exquisite. GRAMMY-winning soul legend Solomon Burke performed "Woke Up This Morning" that had Sopranos fans in the audience excited. The Fray (a band made famous by the inclusion of their songs in TV shows) concluded the event with a performance of "How To Save A Live" and "You Found Me." What a fantastic live band they are.

GRAMMY Week is off to a good start! My Superfraiche Pop Night LA is tomorrow, then Clive Davis' annual shindig on Saturday and then, of course, the big GRAMMY show on Sunday. Make sure to follow me on Twitter and Facebook for all the real-time updates.