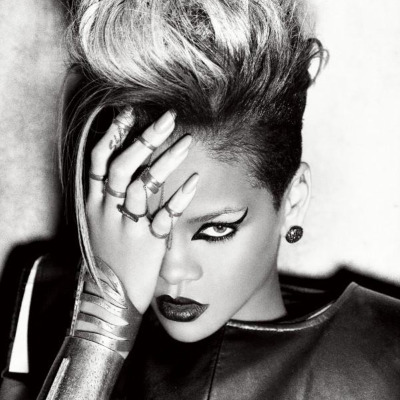 Here's a little tidbit about Rihanna you may not know about...

None other than Roisin Murphy's partner Simon Henwood is the creative force behind the brand and styling concept of Rihanna's new album "Rated R." Henwood is a celebrated painter, filmmaker, set designer and brand visionary who was enlisted by Rihanna's team to be the overall creative director for the pop star's global imaging.

Henwood conceived the look and feel for the logo, album, videos and TV spots - and is now working on Rihanna's forthcoming world tour, including the show's stage design, costumes and background visuals.

Rihanna and Henwood worked closely together in the months leading up to the album release. "We talked extensively for months before the album's release, and looked at every aspect of the campaign-  from styling to stage ideas and visuals," he tells ArjanWrites.com. "Everything comes from the music, and this is her most personal album to date - so everything draws from it in one way or another."

"There is a great story that will unfold through the campaign, and finally reveal on the tour.. partly inspired by the film - The Omega Man and of course ideas from the songs - as well as Rihanna's personal visions."

One of the most captivating element of the "Rated R" branding is the "R" logo. "The logo is a two edge sword (literally)," Henwood explains to me. "One side symbolizes strength and the other vulnerability. I designed it as a 3D object first that changes form in rotation as an animation - It forms the logo shape at the end of the loop. "

"I also designed it as a physical object that translated to a "badass" solid silver bracelet - that she wore for the album shoot.