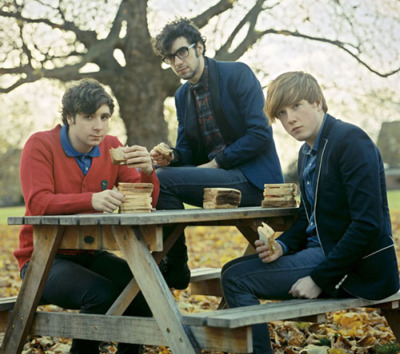 BBC tastemakers voted emerging new Brit trio Two Door Cinema as one of the hottest new acts to watch in 2010. Signed to the indie French hipster label Kitsune, their music is best described as an atmospheric brew that mashes up the crunchy electro pop of Death Cab for Cutie, the sweet melodic stylings of Keane and the indie qualities of Phoenix. Yummy.

The group is currently stirring up a storm in Europe as the opening act for Phoenix on their European tour. Their music is some dynamite stuff. Make sure to sample some of the songs on their MySpace page. Also, check out a totally guilt-free MP3 download of "Undercover Martyn" that gets a buzzing electro make-over from Whatever Whatever.