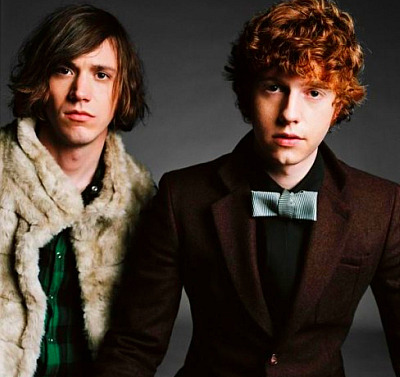 One of my most favorite albums of 2009 was by far Chester French's debut LP "Love The Future." There are a couple reasons for that. First, long-time readers of ArjanWrites.com know I was one of the first to champion D.A. and Max. It was exciting for me to see that after years of hard work and patience their music was finally released on a major label for the masses to enjoy. (And you may remember I nominated them for their very first MTV award. See video of D.A and Arjan.)

But more importantly than that, Chester French released one of the most exciting and ambitious pop records of the year. Growing up on '60s Britpop, '70s singer/songwriter melodies, '80s synth pop and '90s rap and hip hop, Chester French is part of a whole new generation of pop artists who mix and match a whole lot of genres into something new. Perfect fare for the kids of the iTunes generation who don't limit themselves to one sound when putting together their playlists.

Combine their musical instincts and love for the classics with a heavy dose of pop culture savvy, an impeccable style and genuine coolness, and what you have is something that is truly invigorating and totally unexpected. In other words, the GRAMMY-worthy "Love The Future" has something for everyone. Exactly what good pop music is supposed to do in my opinion.

After touring most of the year (with Lady GaGa this spring), D.A. and Max are currently working on new music in Milwaukee, Wisconsin. To thank their fans for all of their support this break-through year, the two Harvard grads put out three new remixes of "C'Mon (On Your Own)" for fans to enjoy and share. Alan Wilkis' remix adds a bunch of really cool electronic bells & whistles, and Pance Party turns the original into a slamming dance floor buster. Off the chain! Love both of these remixes. Highly recommended. (Check out some of their cool new merch as well.)