arjanwrites.com: And the 52nd GRAMMY Nominees Are...

And the 52nd GRAMMY Nominees Are... 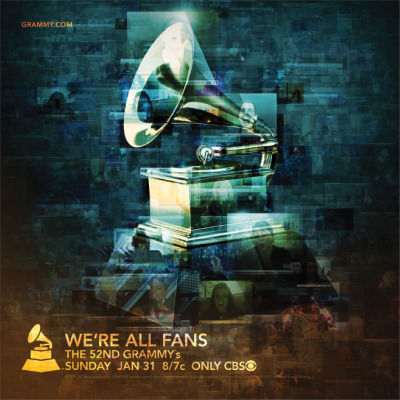 The ladies better get their gloves out on January 31!

It will be the battle of the female titans competing in all the major GRAMMY categories. Beyonce is leading the pack with a stunning 10 nominations, followed by Taylor Swift who received 8 nominations and Lady GaGa who received 5 GRAMMY nods, including Record of the Year, Album of The Year and Song of the Year.

I covered last night's ceremony from the GRAMMY Media Center next door to Nokia Live. While watching the show, nominees, presenters and other talent visited the Media Center to answer questions from the press. I was able to work in a question for David Guetta and RedOne, the big melody maker behind all of Lady GaGa's hits.

VIDEO: Arjan asks RedOne about his knack for melody

Some highlights and other noteworthy GRAMMY nods:

Best Female Pop: Taylor Swift, Adele, Beyonce, Katy Perry and Pink are competing. Kelly Clarkson is missing from this list. I had expected she'd be up in this category. Also missing from the list is Whitney Houston. In fact, she was shut out in all categories, even tough J Records decided to move her album's release date to meet the GRAMMY deadline.

Best Male Pop: Soulful crooners Stevie Wonder, Seal, Maxwell and John Legend are competing with Jason Mraz who was nominated in the same category last year. Was hoping that perhaps MIKA would get a nod as his album met the GRAMMY deadline.

Best Pop Performance by Duo or Group: This is a nice eclectic list of young new guns and players that have been around for a while. Nominees include Black Eyed Peas, Bon Jovi, Hall & Oates, The Fray and (surprise!) MGMT.

Best Pop Instrumental Album: It will be a battle between Chris Botti, Hiroshima, Booker T Jones, The Rippingtones and Spyro Gyro.

Best New Artists: Zac Brown Band, Keri Hilson, MGMT, Silversun Pickups and The Ting Tings. Keri Hilson is really not all that new. She has been a songwriter for a very long time, but this is her first outing as a vocalist on her own.

Other nominations I was excited about were: Pet Shop Boys (Best Electronic/Dance Album), Madonna (Best Dance Recording), Greg Kurstin (Producer of the Year), Anders Trentemoller (Best Remixed Recording). Phoenix, The Yeah Yeahs and Depeche Mode are up in the Best Alternative Music category.