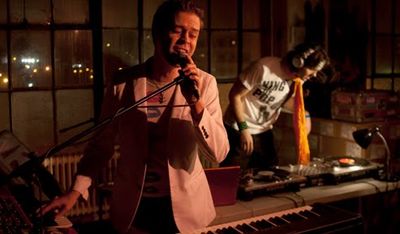 It's so good to hear that the very talented Kaz Gamble is back with something new. After hitting the scene together with Sisely Treasure as the spunky and poptastic Cooler Kids a few years ago, things looked very bright for the pop duo. They went on tour with Erasure, received reviews in major music pubs and even had their own float during New York's gay pride in 2003. But their rise to fame hit a road block when they became the victim of label politics and their Dreamworks Records folded.

But good music and talent will prevail.

Kaz and Sisely continued as the duo BoyGirl independently. Then thing got a little quiet again. But voila! I received an email with a brand-new track from Kaz's new project (once again a duo, he must like that). This new pop act to watch is Gamble & Burke, a teaming between Kaz and and new vocal partner Burke.

Check out a demo of "Isolated" a funky, soul-pop stomper with a few kicky electro-tinges that is mighty good and super delicious. So glad that he still has the hotness in his fingers to work the sound board and crank out exciting new pop (aka funky Bboy soul). Bring us more of this, Mr Gamble. (Also watch the fun new video of "Isolated" that featured rick James & Eddie Murphy.)