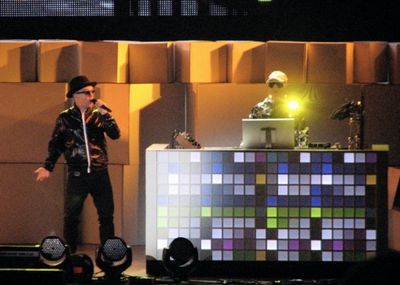 (ArjanWrites.com guest blogger Will W. saw the Pet Shop Boys perform in Toronto this weekend and wrote up a great review of the show. Thanks, Will!)

Pet Shop Boys were a surprise addition to this year's Virgin Festival, also known as V-Fest. The influencial British electronic synth-pop duo consisting of Chris Lowe (Keyboards) and Neil Tennant (Vocals), made their first visit to Toronto in three years tonight as one of the festival's headlining acts. Much controversy had arisen over the original choice of venue in Orillia, Ontario which is an hour and a half from Toronto. Festival organizers eventually decided to relocate the event to Molson Amphitheatre based on the urging of ticket buyers.

Performing in front of an audience consisting of mostly twentysomethings whom might not have been familiar with the duo's repertoire was an ambitious task, but Pet Shop Boys wowed the audience completely by the end of their hour long show.

The set was in-line with their aesthetic of multi-colour blocks/squares as seen on their latest album "Yes". Lowe operated most of the music from his computer, surrounded by an LED-lit cubicle stage right. Tennant graced the audience with his still angelic tenor vocals, backed by a team of energetic and quirky dancer/backing vocalists. Visually, the show was very dependent on Tokyo-futuristique graphic projections and fancy lighting - stunning.

Undoubtedly, the audience had seen a more scaled-back version of the show versus what an audience might see on their current "Pandemonium Tour". Based on the time constraints of setting-up in a festival, plus limitations in Molson Amphitheatre's size, this would be an understandable compromise.

Some selections from "Yes" were performed like first single "Love, Etc.", "Did You See Me Coming", "Around the World" and a mash-up of Coldplay's "Viva La Vida" with early hit "Domino Dancing". Hits like "Go West", "It's a Sin", "Suburbia" and "Always On My Mind" were clear audience favourites. Unfortunately however, many key hits were omitted tonight like "Being Boring", "Where The Streets Have No Name" and most importantly "What Have I Done To Deserve This?". Surely one of the fine female dancer/backing vocalists could have filled in on Dusty Springfield's part? The show was capped off with an encore of their first #1 hit single "West End Girls" where the audience saw both Lowe and Tennant donning flamboyant headdresses. Tennant's vocals are almost identical to how they sound on the album, a pretty amazing feat.

All in all, this was an experience not to be forgotten soon. Pet Shop Boys definitely know how to put on a fun audio/visual experience for their fans.

To see a high quality video clip of "West End Girls" which I uploaded, visit my YouTube Channel at http://youtube.com/mrwillw. Pictures of the show can be found right here.