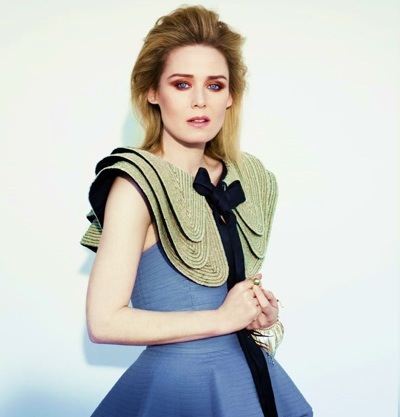 Roisin Murphy is feeling fabulous, healthy, hopeful, creative and happy these days. There's no time for controversy to spoil that mood. So it wasn't a surprise that the singer was quick to put out an official statement to address a brewing controversy about some unfortunate misquotes in the Irish and British press about Lady Gaga.

She wanted to provide some additional commentary for fans and opted to speak exclusively with ArjanWrites.com and Raj of EQ to provide a little more info about what happened and bring fans up to date about what she has been up to lately in a mini press conference of some sorts. (Read Raj's part of our joint interview here.)

I have met Roisin numerous times (remember this video?) and it's always such a pleasure speaking with her. Roisin is just like her music. Candid, thoughtful and to the point. I adore this woman.

Arjan: How are you, Roisin? Nice to speak with you again.
Roisin: Likewise, Arjan. I'm extremely well. I'm very fit and healthy

This morning you put out a statement that corrects some of the misquotes about Lady Gaga that were published in Irish and British newspapers, including the Evening Herald and the Daily Mail.  What happened in those interviews?
It was an interview for Action Aid and I was a little surprised when it started with questions about Lady Gaga, whether I liked her, whether I had seen her about. All my answers were my honest answers, which was that she is really talented, a great performer and that she wrote her own songs and that she is a more than worthy pop star. So I was really surprised when I saw the article and those nice things I said weren't put in there at all. It just felt at the time that it was a bit of a trap when the person was asking me all these questions. That's an uncomfortable place to be when you try to promote a charity single, you know.

So you never said that Lady Gaga is an imitation of you?
I never used that phrase! When the interview originally came out, there were no quotation marks, so it was obviously the opinion of the journalist. But the article has gone down through so many variations that things ended up being totally [taken out of context]. What some press does now is that they take bits from other articles, and they put them together and they make a new article.  Then there was a whole page in the [Daily Mail] about my style versus Lady Gaga's so there was obviously an editorial decision to make a page about it and it had in big, black fat letters this quote at the top, and I never said it! I mean I did say that perhaps [Lady Gaga] is inspired by my style a little bit, but I said that after I praised her and how fantastic she is.

It upset me more this time than ever before for a couple of reason. First, because it started in Ireland and I was in Ireland at the time. I was a bit shocked that the Irish press would suddenly try to fabricate some kind of story about this, and secondly because [that first interview] has gone through some many variations
(. . .) creating these brand-new articles. I have not seen that this much before.

You are a public figure who has done many interviews over the years. What made you speak up and put out a statement about this particular incident. You could have opted to ignore it.
I was reading a lot of comments from people and there was one comment from one of my fans on the internet who  said "can't we like both?" I thought to myself, 'bloody hell, for the fans that want to like both, it is not good to [have this quote floating around]. It is just not good.' I don't want it to stand when it is not true. I hope this statement addresses it a little bit [for them]. It's for the fans, it is not for the average Daily Mail readers. They will never hear it. At least as long as my fans know that this is not the way I am.

I did it meet Lady Gaga actually as I said in the interview. It was very swift, and she was very nice. They asked if I was wearing shoulder pads at the time, and I said I wasn't and then they asked if she was, and I said 'No.' Fascinating.

Let switch gears and talk about your new music. Fans are anxious to hear what you have been up to. In an interview with the BBC recently you described the sound as more "urban."
It's tricky when you speak about it in that way, because honestly the record is still evolving. I'm still mixing and I have started to finish tracks now. A track like "Demon Lover" is very, sort of British urban sounding. And then I've done another track called "Billionaire," which is more classic Roisin Murphy type of sound. I did that one which Seji who also produced "Overpowered." Then there's some kind of old-school electro stuff that I've done. That's more straight-forward house stuff.

There's a lot of different things that I have been doing. I have been really creative. It has been a very creative period for me. It', feeling good, because I'm actually starting to mix. So the tracks are beginning to be finished, glossy and fabulous.

Was there a specific mood or emotion driving this new record?
I don't think I really will be able to say until I look back on the period. A big emotion... Mmm. Well, there's great things going on in my life. I'm feeling pretty fabulous. I'm feeling very hopeful, but then on the other hand there's lots of darkness in the world at the moment.

For "Overpowered" you traveled overseas to Miami and Barcelona. Where did you record this album?
Not very far actually. All around London.

I  think of you as always being able to strike a perfect balance between style and substance. The visualization and imagery of your music is very important. Do you have imagery in mind yet for this new record?
That's the last thing I get to really. I'm all about the music right now.  I'm in jeans and shirt in the studio everyday. I have my head totally in music and what usually happens is when you're done with the music you get to think of the images.