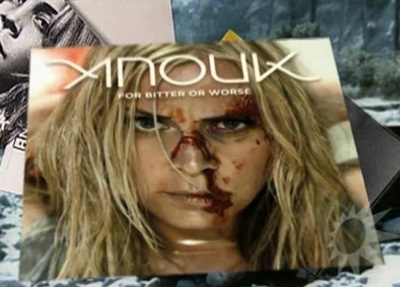 Popular Dutch TV show RTL Boulevard revealed yesterday the official cover art for Anouk's sixth studio album, "For Bitter Or Worse," which will be in stores late September. Looking bloody and bruised, it is certainly a daring shot like everything else we have come to expect from Anouk. When pictures of this photo shoot first surfaced last spring, rumours were floating around wildly that the rock diva had been in a fist fight. Now fans finally get to find out what the reason was for these (staged) photos.

In an interview with RTL, Anouk talks candidly about her label EMI that refuses to invest in the singer internationally. "I have tried for years to convince them to go international with my music," the singer says. "But they have absolutely no interest in that. They are probably happy with the success I have in The Netherlands and that is enough for them or maybe I'm just too old. (. . .) There's no point spending more energy on it. I'm gonna finish out my contract, make a few records and I'll see what happens after that."

EMI must be out of their minds. Very disappointing. I'm not sure why EMI execs do not see the opportunity of promoting such a rock giant across the Dutch borders. She has the voice, the looks and the guts to go places. Watch this to see what I mean.

(P.S. @robster16 makes an interesting observation and points out the symbolism of the "Anouk" logo as a crown of thorns.)