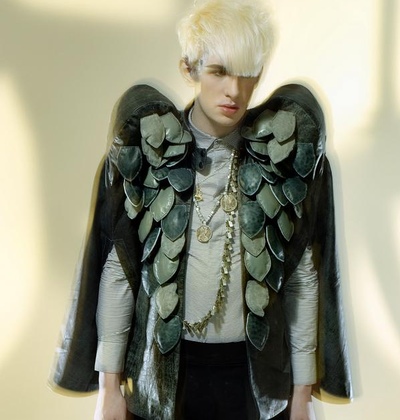 I recently chatted with MTV Logo ArjanWrites Award nominee Patrick Wolf about his much-anticipated new album, "The Bachelor" that will be released digitally on June 2 and will be in stores on August 11 on NYLON Records.

Originally intended as a double-album, Wolf's "The Bachelor" began its creation immediately following his tour for 2007's critically acclaimed "The Magic Position."  Exploring his own doubts on ideas of love and marriage, Patrick found inspiration in experimentation with bleak electronic and industrial sounds, as well as finding solace in some of the classics of his teenage years like The Pixies and The Raincoats.

Arjan: Thanks so much for taking my questions, Patrick. How  did your recent tour go? Was it fun to perform some of your new tracks? How was the audience response?

Patrick: It had been a long time since had done any shows, our last proper show had been over a year ago as I had taken time off to finish "The Bachelor." Despite lots of rehearsing, It wasn't really until the third night of the tour I really felt us start to communicate better onstage and I remember a moment onstage in Cambridge where it really felt as though we were doing something very exciting, I felt a certain magic in the air between us and the audience. The new show incorporates alot of new technology and performance techniques, costume changes, wireless in ear monitors, headset microphones. It took a few shows to iron out any technical glitches. It was only a five date tour, a public dress rehearsal or test to try out the new show before the huge tour coming up that will see us going round the world for about two years.

You have decided to release two new albums in the next two years. Can you fill us in on some of the details of these releases? Album title?

The first album is called "The Bachelor." Originally the album was a double album and "The Bachelor" was the name of the first disc. The narrative of the album is split in two. "The Bachelor" is in exploration of me as a man who gave up on the idea of love and marriage, a time when I was very lonely and pessimistic about my future and the idea of entering a relationship. As a producer, I was exploring quite bleak electronic sounds and hard industrial beats. There is alot of heavy distorted surf guitar and I guess is influenced a lot by some of the music I used to listen to as a teenager, like The Pixies and The Raincoats. This is the most expensive album I have ever made, it was recorded in some beautiful studios with great engineers, It really is a labour of love and over a year of long studio hours with some really genius musicians. Two songs were co-written with Alec Empire from Atari Teenage Riot and and there is some additional electronic production from Mathew Herbert. Tilda Swinton does the narration. Its a bit of an epic I guess thinking about it all in hindsight...This is my first album where I have used a big string section and my first ever work with a choral section too.

I believe you intended to put it out as a double disc. Why did you end up making it two separate releases and telling them as two different stories?

I took a writing holiday last week to Cornwall to properly finish off the second part of the story. "The Bachelor" was getting to a point where it felt perfectly finished, as though I wouldn't change a note or lyrics. I still felt there were a couple of songs or stories to be written for the second part. I was right. I start the finishing off of the second album this week. I have given myself absolutely no down time over the next two years. I need to keep creating and writing or I feel lazy and go a bit mad. The second album is what happened after I met my true love one December night at the end of 2008. How I went from being very pessimistic about life and love to suddenly a year later where I am making someone breakfast in bed and moving into our home together. The bachelor becomes the groom I guess. It would make a good movie I think. I go from being a total hedonistic fucked up drunken bachelor boy in a house full of rubbish and fruit flies to  being a loving domesticated house husband who is fast asleep in bed by 10 o'clock reading a book and drinking red bush tea.

You've found a novel new way to promote your new album independently with Bandstocks. How does this work? Has it been paying off?

It's been amazing, the most exciting thing to me Is that I feel it has re-established a close bond between me and my supporters again. I was starting to feel a distance between my hardcore fan base and me during the magic position, everything got a bit corporate and I was very out of control of the marketing aspect of my music. There was a lot of money being spent in places I was unhappy with. Now I have total final say over every penny that is spent on the everything from the recording to the advertising to packaging and distribution of the album. I have always felt very empowered by being aware of the business behind making and selling records and I feel that me and my team at Bloody Chamber Music (my label I set up to take care of my back catalogue and my current album) are trying to stay 100% percent aware of all the rapidly changing and evolving industry and economic climate around us. I find that if you don't embrace the changes around you then you end up stagnating and fucking yourself over. A lot of labels are very scared of all the new technologies and are running their labels as If its still 1995, we're trying to do a label (and bandstocks is a great modern way of financing everything) that is run as though its 2015. Its fun and i'm really enjoying the freedom it is bringing us.

Now that you have full creative control do you feel more inspired and feel you can take more risk? Talking about risk, the video for "Vulture" is stirring up quite a few emotions with people. Are you fascinated by s&m culture?

To answer both questions, I have always, even during my days at Universal retained full creative control over my music, artwork and videos. It's just now there is no one to argue with in order to get what I want. The funny thing is that a lot of people have been asking me, specifically with the new sound or the recent video about me being a risk taker, but I see what I do as very normal to me. I'm just making the things I have to make as Patrick Wolf, I'm 100% percent unaware if the things I do are unconventional or risky, the images I play with in the "Vulture" video seems so normal to me. The beats and sounds I make are the most natural thing I can think of. It would only be risky for me to make something against my character or aesthetics and try to be someone or something else that I am not, so in a way I don't see myself as a risk taker. S&M and bondage are two things I have always had a fascination with, there are so many hundreds of different sexual practices in the world, and god knows I have been having sex for over 10 years now so I've explored many things in my time. I thought it would be interesting to make a video as a boy and be submissive to an unknown threatening dominating presence. I think it is a taboo for a male to show vulnerability in pop culture, I think that is why the video has pissed so many people off so far, I understand it makes people uncomfortable, but I really don't care. The world is far too conservative right now for my liking. It feels very natural for me to write a song like the "Childcatcher" on my first album or to write about something that makes people think and feel something different to what they are used to. I would have made this video wether I was on Universal or not, it is not at all a reaction statement to not being on a major label anymore, that has been a huge misconception.

I'd imagine it must have been very liberating for you to film the video. Was it?

I find all performance  and creating liberating, but If you're asking me if partaking in sado-masochism on camera was liberating then not at all, I am already a very liberated person sexually and morally.

Was there a specific point you were trying to make with the video ? Or was it mostly about the visual aesthetic in combination with the music?

Like all my music videos have been, I am always just making a visual representation of the lyrics and the music. Music videos make a song 3 dimensional I think, You have the lyrics, the music and the video. The 3 dimensions.. All should complement each other.

We are used to your eccentric characters from the albums. How much of those characters are your own self and how much is your imagination/creation?

They are all myself. I hate being called eccentric! sorry, I think I am a very normal person. I have a very over active imagination that is true, but a song like Tristan or Vulture is not really a character, it's an exploration of my emotions or identity. The poet Arthur Rimbaud had a great saying "I is another", to me this means that on a song like The Bachelor, I am telling the listener something about myself through the experience of a pig farmer from the Appalachian mountains. I am not a pig farmer but by singing a song from his point of view, I'm exploring certain parts of my personality and experience.

What's the story behind the boy in red shorts and what can we expect from him in the next two albums as they represent opposites?

The red shorts! Ah. I only have one pair of red hot pants. I think I bought them In Portland actually. I'm actually more into fabrics like leather and wood at the moment. I'm into clothes that would be worn in battle during medieval times or in a sex dungeon. I've put the hotpants away for the next couple of albums. I'm a bit more of a gentleman or a warrior these days I think.

What musical artists are you currently enjoying?

I've been listening to the composer Gavin Bryars alot. Been going through a Lil Kim phase recently too. Micachu has an amazing album out called "Jewelrey". The new PJ Harvey and John Parish album is genius. Fever Ray has a great album out too. Really genius actually and I recently saw Peaches at the Royal Festival Hall and I can hands down say it was one of my favorite shows of the last 5 years. I guess there is some kind of pattern to my music collection. Strong inventive women and modern classical composers like Stephen Micus and John Cag.