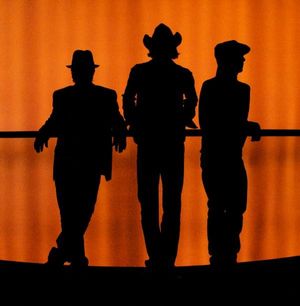 Man Is Doomed is a "neo-disco-electro-funk" band created by the music production duo The Skeptics (Brian Casey and Danny Burke) and visual artist Anton Friant. Inspired by electronic, funk and disco music, Man is Doomed's debut LP "Escape to Europa" is a combination of contemporary dance production and classic pop songwriting.

Brian, Danny, and Anton all met while students at the University of St. Thomas in St. Paul, Minnesota in 2001. In addition to Man is Doomed, the trio has also released records as the art-pop outfit Glorious Monster. Brian and Danny have also written award winning music for a variety of TV, film and advertising projects as the composition/production duo The Skeptics. Working with In The Groove Music, a Minneapolis-based commercial music house, The Skeptics have worked on dozens of projects for companies such as BMW, Coca Cola, Sony Picture Classics, MTV and the Discovery Networks.

Check out Kid Color's remix of their new single "Take Off Your Pants & Dance," which may make do just that.