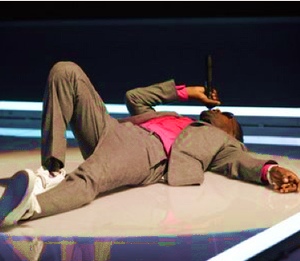 Did you watch VH1's Storytellers with Kanye West tonight? I did. And I thought it was very well put together. Amazing stage and lighting concept. Stark, sleek and very shiny. The set was conceived by Es Devlin and Martin Philips. Most recently, Devlin designed the show for the Pet Shop Boys at the BRIT Awards, and Philips is mostly known for his work with Daft Punk and his design of the LCD pyramid.

Devlin and Philips most definitely added a very entertaining dimension to Kanye's show. The emcee performed some of his biggest hits, including "Amazing," "Flashing Lights," "Stronger," Hearthless," "Say You Will" and "Robocop." In between songs he told stories about his songs with a little rant here and there.

Some quotes that I caught tonight.

"A lot of the things you learn are wrong, don't be an asshole too long."

"If a rich man would run into a poor man, what would they learn?"

"If a black man that came from Chicago and was taught to stand far away from gay people because you don't want to be accused of being gay. [What would happen if he'd run into a gay man] What's the talk? What would he learn, what would I learn? I learned that people in Chicago were wrong and I been an asshole all along."

"My greatest pain in life is that I will never be able to see myself perform live."

Somebody really should start a blog with Kanye quotes. Whatever he rants, raves and hollers is sometimes genius, sometimes insane, but always entertaining. (And big kudos for Kanye for bringing up the gay topic, which still remains a big taboo in hip hop.) 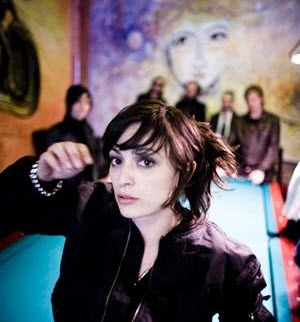 Time's for something a little different. Check out a totally guilt-free download of "Someone Stole My Car" by Berlin indie rockers Super 2007. The song is taken from their new album "Lovebites" that is available in U.S. download stores now.

"Someone Stole My Car" is a beautifully crafted, unconventional pop tune that invokes memories of the lush, organic qualities of forward-thinking bands like Goldfrapp and M83. A press release describes the magical meaning of "700" in the band's name:

"The number 700 is a sacred number. The hidden temple has 700 entries, there are 700 sins, 700 famous mountains and the legend of the 700 spices of Alu Ben-Grachier and then there is the “Super 700”. 7 musicians female and male (discounting future ballet ensembles and symphony orchestras), 7 very special talents, 7 maniacs, 7 fine tuned guardians of good taste (. . .) Super 700 are wild and smart, gorgeous and disheveled, progressive and totally focused, very normal and extremely cool. Only the best can be heroes."

And there you have it. The songs for "Lovebites" were written by Ibadet and Bassplayer Michael early 2008 in France. The album was produced by Irishman Rob Kirwan (U2, Depeche Mode) and recorded in the Planet Rock studios in Berlin. Download the track after the jump.

Janelle Monae Ready to "Pop Like A Firecracker" with No Doubt

Janelle Monae reveals a little more about her upcoming summer tour with Gwen Stefani and the rest of No Doubt on her Wondaland Arts Society blog.

"I have been buried deep in Wondaland, finishing Suites II & III! I have also been skydiving, learning to play chess, and swimming in the Black Seal. I have been SO inspired and full of new ideas that I needed to purge them all out! I must say that I am overwhelmed and highly excited about the new tunes! Can't wait to share the new art with you! It takes me to so many places.:)

As well, I will be on tour with No Doubt this Summer! I have always been a big No Doubt supporter, so I am thankful that I was asked to play alongside such an amazing band! Really cool artists like Bedouin Sound Clash, The Sounds, and Paramore will also be on the tour! Can't wait to meet them all!:) The Monáe's and I will be playing new tunes! Can't wait to create magic and pop like a jumping firecracker!

Delphic is a brand-new, crunchy electro trio consisting of Richard Boardman, Matthew Cocksedge and James Cook from Manchester, England. The three met last year and bonded over their passion for everything dance and electronic. The group likes to describe their music as a spontaneous brew of electronic music played by a live band.

"They make their music on laptops before figuring out how to play it live, throwing guitars, bass and drums over the electronics to result in their unique sound, then take to the stage and stitch their songs together into one continuous euphoric DJ set-like onslaught."

Watch the video for their debut single, "Counterpoint" after the jump, It's a propulsive, emo-filled electro stomper that incorporates elements reminiscent of British nu-ravers the Klaxons with the '80s sensibilities of New Order. The track was produced by Berlin based producer/remixer Ewan Pearson who is soon to start work in Berlin with the band on their debut album, due for release later this year. Delphic is currently touring with Bloc Party in Europe.

Guest Review: Kelly Clarkson "All I Ever Wanted" 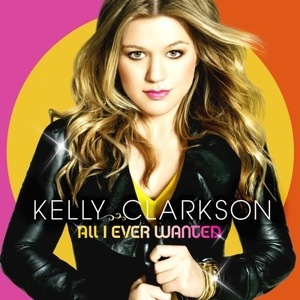 ArjanWrites.com reader Will W. had a chance to preview Kelly Clarkson's much-anticipated new album "All I Ever Wanted" and wrote up a glowing review. Read it after the jump. (Thanks for sharing, Will!)

Continue reading "Guest Review: Kelly Clarkson "All I Ever Wanted"" »