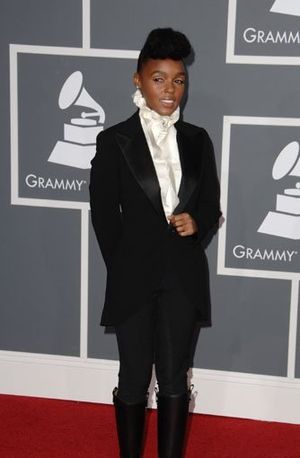 I was great seeing Janelle Monae and her band on Sunday at the pre-televised show as well. Monae was up in the Best Urban/Alternative Category for "Many Moons." I went over to see her in the crowd and she gave me a big hug. "You look so handsome," she said. "And so do you," I replied. I wished her good luck and fun for the evening.

Monae ended up not taking the GRAMMY, which was scooped by Chrisette Michelle for "Be OK."

On Saturday night, I went over the swanky Mondrian hotel on Sunset boulevard in West Hollywood to watch Monae perform at the outdoor Skybar. The singer performed most of the tracks from the "Metropolis: Suite 1" EP, including crowd favorites "Smile," "Sincerely, Jane" and her GRAMMY nominated song "Many Moons."

Monae is such firecracker on stage, moving and dancing around like her life depends on it (and it probably does). She amazed the crowd when she jumped into the audience at the end of the performance, pranced up and down, then jumped in the hotel pool, followed by a climb up a tree that was located next to the stage. She's a stage beast!

Look out for new Janelle Monae music later this year.