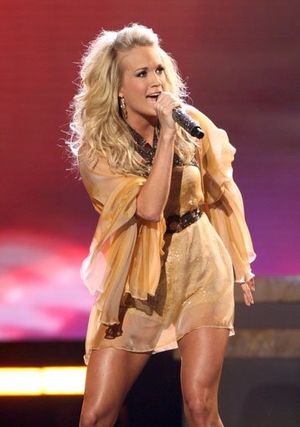 One of the artists who truly impressed me on Sunday was Carrie Underwood. She won multiple GRAMMYs, including one for Best Female Country Vocal Performance. She was the only major singer to skip the start of the Red Carpet to attend the pre-televised show. She graciously received her award and made a touching acceptance speech.

She also came up to the Media Room after her GRAMMY performance to speak with the press. Humble and thankful, she appeared in yet another dress (she wore three total that night) and explained that winning never gets old and that she still gets very nervous to perform on live television.

I think her performance of "Last Name" was on fire and she looked stunning, don't you think? (Photo via John Shearer/WireImage)