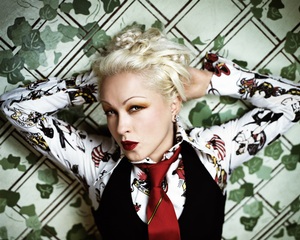 After more than 20 years in the music business, Cyndi Lauper continues to crank out music that pleases her fans, impresses critics and gets the attention from The Recording Academy. This year, the iconic singer and humanitarian is up for a Best Dance Album GRAMMY for "Brink Ya To The Brink."

Lauper sure is no stranger to the GRAMMYs. She won her first GRAMMY in 1985 when she received the coveted award for Best New Artist (watch that classic GRAMMY moment here). Since then, she has gone on to produce lots of different music projects that have garnered her multiple GRAMMY nominations along the way, including Best Female Pop Vocal Performance (1986), Best Dance Recording (1999) and Best Instrumental Composition Accompanying a Vocal (2005). The variety of her GRAMMY nods is a tribute to Lauper's tireless talent to innovate and do lots of different things, and do them really well.

Arjan: Congratulations on your nomination! Where were you when you first received the GRAMMY nomination news? What went through your mind?
Cyndi: My manager called me and told me. She heard about it when the nominations were announced. I was at home with my husband David. It's really nice to be recognized. I was thrilled to hear it of course.

What does it mean at this point in your career to be nominated for a GRAMMY again?
It's always great to be nominated. I've been very lucky to be nominated every few years which gives me industry validation. My fans liking what I do is most important but it is nice to be recognized by one's peers.

The last time I was nominated was in 2005 for Best Instrumental with Vocals Arrangement with the song "Unchained Melody" off my "At Last" CD. That was a new category and I was as thrilled with being nominated for that. I was very proud of that nomination.

To be nominated this year for Dance Album of the Year is also gratifying because I have always lived part of my career in the clubs doing late night gigs and working with remixers. I love the genre so to be recognized for my contribution too is very cool.

How are you preparing for the ceremony? What are you wearing on the Red Carpet?
I always try and exercise and stay in shape but when the GRAMMYs are coming up I'm a bit more motivated. Not sure what I am wearing yet. I have a few outfits I'm considering but I haven't decided yet and probably won't until day of the show. I am going to have fun picking one out for the Red Carpet.

Are you going to be majorly disappointed when you don't win, or really surprised when you win?
I would love to win of course. It's always fun to win.

Everybody will be at the event on Sunday. Is there anybody in particular you looking forward to meeting?
It's like going to a reunion,  To see all your friends and the young artists at their very first GRAMMYs is fun to watch too.

What is happening after the Grammys for you? What are your immediate plans?
I will be shooting a movie in April & May then go on tour in Europe for festival seasons. I also just signed a book deal for my autobiography that will come out at the end of this year or early 2010. My charity work is also very important to me and I am in the process of launching my own foundation called the True Colors Fund which focuses on the LGBT community.