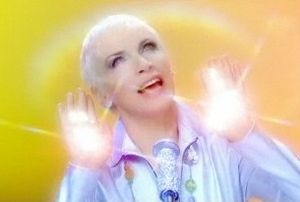 It's an excellent, middle of the road pop song with a fitting video which features lots of saturated colors and a backing band consisting of multiple versions of Annie herself.

"I didn't know who the band was going to be because I really don't have a [regular] band," she tells Spinner. "I was thinking, 'I'll get some women [and] it'll be an all-female band.' Then I had another thought, 'Well, maybe I could just be all the women in the band,' and that would be fun. So I'm all the characters in the band at the same time. I mime bass and lead guitar really badly. [But the video is] really sweet and it's beautiful."

This woman never ceases to amaze. She's still so full of energy and looks mighty fit in that silver spandex outfit. Not bad for a 54-year old lady!