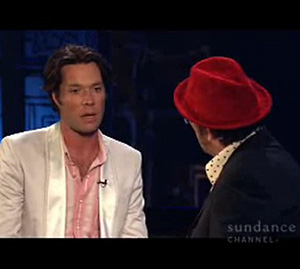 Singer/songwriter Rufus Wainwright was recently interviewed by fellow musician Elvis Costello on his Spectacle TV show that airs on the Sundance Channel.

The Canadian crooner not only performs "Memphis Skyline," his haunting ode to the late Jeff Buckley, he also answers questions from Costello. They talk freely about Wainwright's passion for music, his complicated family dynamics and his status as an icon of the gay community.

His mother, the Canadian folk legend Kate McGarrigle, even turns up to join in on an unexpected performance, and Elvis covers a song by Rufus's father, Loudon Wainwright lll.

This is excellent music television. I love how honest Wainwright is when Costello inquires about his "gay songwriting" and if that matters at all. Rufus explains that he is first and foremost an artist and human being, but that being gay is very much part of his art and nothing that he is apologetic for.