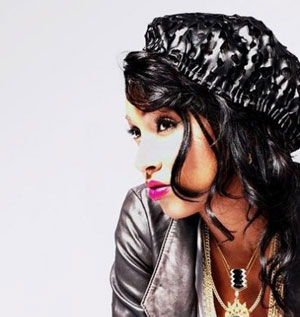 Fresh off her tour with Kanye West in Europe, emerging new R&B pop singer Melanie Fiona is back in the States this week to start promoting her forthcoming debut album, titled "The Bridge."

Melanie Fiona is a hot new talent you should check out. Listen for example to her single track "Give It To Me Right" that features a stellar vocal performance by a confident Fiona. Her voice glides soulfully over a throwback beat that is backed by a sample of The Zombies’ classic “Time of the Season."

Born to Guyanese immigrant parents and growing up in the inner city of Toronto, Fiona was surrounded and inspired by music ever she was a little kid. She started writing songs and was introduced to her manager in her late teens who helped her start a professional songwriting career. Things changed when she met Andrea Martin who is known for penning hits for En Vogue, Angie Stone and Leona Lewis’ recent hit “Better in Time."

The two struck an immediate connection and started working material for Fiona's own album, which resulted in her forthcoming debut LP. Other collaborators on the album include UK producers Future Cut, Vada Nobles (of Lauryn Hill fame), The Stereotypes, Natasha Bedingfield-collaborator Peter Wade and Salaam Remi, known for his work with Amy Winehouse and Nas.

What grabs me about Fiona's music is that she totally makes you feel the music - all the way,  from your toes up. It's what good soul music is supposed to do. Check out "Give It To Me Right," and let me know what you think.