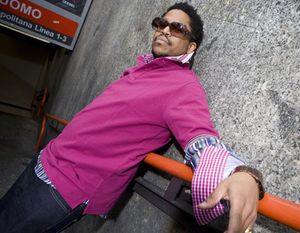 I went over to Felix da Housecat's home a couple of nights ago to meet up with him and MOTOR's Bryan Black. Bryan was in town to record a few final tracks for Felix's new double album.

I previewed a bunch of his new songs and it sounds very, very good. Punchy electro-house with big, atmospheric highs and soulful lows. Felix has such a great ear for new sounds. It's no surprise that the two time GRAMMY nominee is such an icon among dance music lovers.

One of the songs that immediately stood out to me is a track titled "We All Wanna Be Prince." It's a funked up dance jam with lyrics that are cut and pasted from difference Prince songs. Felix is "the number one" Prince fan and this is his tribute to the Minneapolis master. He confided that he previewed the track to Mark Ronson and Dallas Austin as well and they both loved it.

Also look out for the first single off this new double record. The track's video features the crazy fun and over-the-top American Apparel heir, Johnny Makeup.