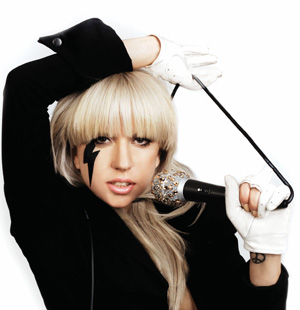 The first time I met Lady GaGa was in her dressing room at the MTV TRL studios on Times Square back in May. I was briefly introduced to the singer by her PR handler while she was getting ready for her performance on the MTV Logo NewNowNext Awards. I nominated the singer for the MTV Logo Brink of Fame Award, which led to MTV's invite to perform the show's big finale.

Since then, Lady GaGa has been traveling nearly non-stop to promote her debut single "Just Dance," which has become a bonafide smash hit around the world. But Lady GaGa has a whole lot more she wants to unleast on the world. In our interview last week, we talked about her inspirations, the importance of her "performance art" and her music. I tried to include as many of your questions as possible. Thanks so much for sending me all questions.

Arjan: Hi there Lady GaGa. How are you?

Lady Gaga: Doing well. I'm getting ready for my next performance with New Kids On The Block tonight.

You might remember me. Back in May, I nominated you for the MTV Brink of Fame Award, which  led to your performance on the show.

Ooooh, you’re ArjanWrites.com! love you Arjan. I know exactly who you are!

Thank you so much. Good to talk again. I decided to take a few questions from readers to satisfy their inquiring minds about the GaGa phenomenon. The first question is about the origins of the House of GaGa. Can you tell us more about your creative troupe?

The House of Gaga is my creative team. They’re all really young people in their twenties. Friends of mine, fashion people, sculptors, engineers - we all come from different creative backgrounds. Some are just singers. We all work together to design the show, and design all my work.

Your recent hits were all produced by Redone. How did this partnership come about and do you think you'll work with him again in the future?

I met him through my management at the time. I’m not with the same manager anymore, but at the time we shared the same management, and I met him that way. I did "Just Dance,” "Poker Face," "Money Honey," "Boys, Boys, Boys" and "Paper Gangsta" with him. I worked with a lot of other amazing producers as well. But absolutely, Redone and I will work together again. We have such an incredible creative bond.

A lot of fans have been asking about the unreleased track "Retrophysical."

I did that song last year, but I didn’t think it was my best work, and I decided not to release it. Perhaps it will be a b-sde one day.

I think that “Paparazzi” really defines me as an artist in a lot of ways. It’s a real pop record but still kind of twisted too. And it  has a really intelligent pop art message behind it. That’s one of my favorite songs on the record. I’m really proud of that song.

You have transformed your artist persona quite a bit over the last 12 months. You were pictured in W Magazine last year in which you were a brunette and now you have become a blond electro goddess. What inspired this new look?

I’ve just been growing. I think everybody grows, just as people over the years, and I grow as an artist. I grow every three weeks! I’m constantly changing. I’m inspired. Especially now. I’m traveling the world. I’m in a different city every night.  I am constantly pushing the envelope to be more and more creative and different and original. And create this beautiful, graphic, important imagery.

Was the choreography inspired by Stefani's Harajuku Girls?

The reference for my dance style is Claude Vanheye. He was a performance artist and singer in the 70's who worked with David Bowie. And I’ve always been inspired by the way that he used this sort of android, androgynous, mannequin-like dancers.  have a clear concept in my mind. I could sit down with you and go through magazine clippings and film and videos that reference every single detail of my show.Those things are part of learning and studying art, and being someone that really – I live and breathe for my work. Those ideas all came together to create the vision of my show. I’m so proud of it. It’s my baby.

People are really connecting to it. They are really inspired by what you do.

I appreciate that you say that Arjan, because what I love so much about this project, is that there is no fans in the world like Lady GaGa fans. My fanbase are people from different backgrounds, different sexual orientations, different music tastes, they’re all dressed up like they’re going to see Rocky Horror Picture Show.

The L.A. Times asked Christina Aguilera about the visual resemblance between you and her that some have hinted at.  Aguilera responded that she wasn't sure if you were a man or woman. What do you make of all that?


I’m not offended by it. But I love my gay fans so much because they always run to my rescue and are so sweet to defend me. But truthfully, I’m not offended by it. I talk endlessly in my interviews about David Bowie and Grace Jones, and how much they both have inspired my work and my fashion. And they’re both extremely androgynous and have a lot of enigmatic imagery. Stuff that is provocative and crosses sexual boundaries. So, for me, it’s a creative decision with my fashion to be androgynous and scary, so I wasn’t really offended by it, as much as everyone thought I would be.

So with all this traveling around the world, you’re in another plane, and you’re going to another country, what are you listening to, how are you relaxing and being able to do all of this?

I’m really into an artist right now named Patrick Wolf. I think you would really love him, really fantastic, amazing, from the UK. I listen to him. I meditate. I have this amazing meditation that I do. I just stay focused, I design clothing on the road, that keeps me sane, on the road, design the show. Every time you see me on tour I’m doing something different, and that’s because on each your I’m designing the next tour.

That’s wonderful. Is there-- What is the craziest thing a fan has done for you so far? I mean you must have run into really fanatic fans. What are some of the amazing things that they’ve done? Or sent you or gave you?

One of my fans got a tattoo of me on this arm. I gotta run Arjan, I love you. Give a shout out to all your readers for me, they’re my dear friends.