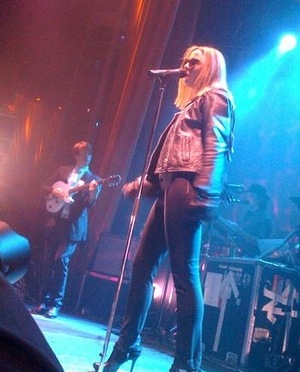 One of the first things Roisin Murphy told me when I met her in London last year is that she is likes to make music for only one reason - to perform it. She loves making records, she loves making videos, but her true passion is to be on stage and let the music come to live.

Murphy finally made her U.S. debut on Saturday at Manhattan's chic Mansion nightclub (formerly Crobar). The show was put on by The Saint at Large, a well-known New York promoter collective. With no new record out in the States, Murphy had been hesitant to play in the U.S., not sure if people would be interested to see her.

But they were. Hundreds lined up early in the evening to make it to the sold-out show on time. Many of them waited for over an hour to get to see the singer. It was an eclectic crowd of gays, drag queens and hot freaks, mixed up with lots of pressies and music honchos.

Murphy took the stage at 9:40 p.m. (video) for a 2 hour action-packed show. From a stomping rendition of "Cry Baby" to a glamorous "Movie Star," and from the extended "Let Me Know" (video) to the encore "Ramalama" (full set list after the jump),  Murphy delivered a solid performance from start to finish. She was supported by two backing vocalists, keyboard player, bass player, guitarist and drummer.

Murphy is a performer much like her music: sleek, stylish and at at times rambunctious. She can tiptoe across the stage as a deer in the wild at one moment and then transform into a headbanging rock chick the other. 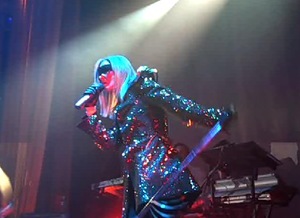 Major part of Murphy's show are her clever costume changes. By mixing and matching different (haut-couture) pieces, she transformed to a different persona for each of her songs. One of the stand out moments was her performance of "Overpowered" (video). Murphy wore a jacket with a deer attached to it on the back that hung around her like dead weight, which perfectly captured the meaning of the song in an unexpected way (and invoked memories of Bjork's infamous dead swan dress.)

Each song also had a unique background projection that added to the mood of the performance. From wavy palm trees for "Dear Miami" to a kaleidoscopic forest for "Primitive."

Murphy shows are not for the squeamish. Just like her unique brand of electro-pop, Murphy challenges her audience. Her fashion, her moves, her play with the band members serves a well thought out aesthetic she wants to present. Often during the show I had the feeling I was at an art show not a pop concert. She doesn't just stand there and delivers a song. Roisin delivers an experience to tickle your eye and ear.

Roisin Murphy went beyond people's wildest expectations for her first U.S. show and delivered a solid performance that will have people talking for a while. More importantly, with some many music execs and press people in the room, she has left a lasting impression that has opened the door for more American attention.

Roisin told me after the show that the show went well. She was happy to finally play in the U.S. The singer also told me about her upcoming European tour and her plans to return to the U.S. in March for an extended tour that includes Los Angeles, Atlanta, San Francisco and Austin for the South by Southwest Festival.

(A big, big thank you to Fallon and Brad for always taking good care of me and a special shout out to my new pal Lapo who is part of the brilliant team who produced Roisin's show and has a lot more on his sleeves.) 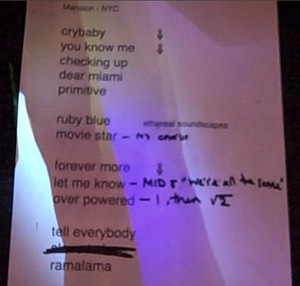