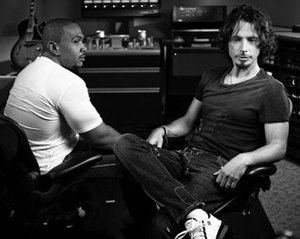 American rocker Chris Cornell teamed up with superhouse producer Timbaland to work on his new album, titled "Scream," which will be released on Interscope Records in November. The first result of their unusual collaboration is the album's title track that will hit radio in the next couple of weeks. And with the help of Timbaland, Cornell might have a huge hit at his hand. Think OneRepublic, think Keri Hilson.

After working with The Hives and Fall Out Boy, Timbaland got a taste of working with rock musicians and Chris Cornell was high on his list to produce next. In interviews, he referred to the recording sessions with the former Audioslave singer as "the best work I've done in my career," and predicted that Cornell will be the "first rock star in the club." Cornell previously had a modest hit with "You Know My Name," the theme song for 2006's Casino Royal Bond flick.

"Scream" presents Timbaland's signature bombast - big, brash beats, dramatic strings and a radio-friendly melody. Whether you like Timbaland or think he's just too full of himself, you gotta give him props for coming up with interesting new twists and partnerships that defy expectations. Head over to Cornell's MySpace page to listen to two additional Timbaland-produced tracks, "Ground Zero" (reminds me of Cee-lo a little), and the party stomper "Watch Out."