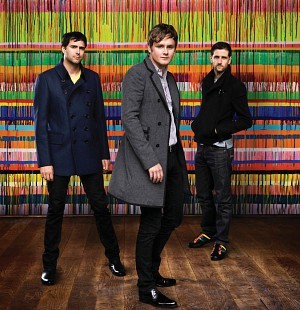 Yes, that is brand-new Keane photography posted above. Don't they just pop?

Keane fans and other pop music lovers should check out the Beyond The Iron Sea podcast, which features loads of Keane news, track analysis and a lot of discussion about everything Keane. In this week's episode, the podcast hosts discuss Keane's appearance at the GQ Men Of The Year on Wedneday evening where the trio received a Band Of The Year Award from Sir Elton John after the group had to miss the show in 2006 due to Tom Chaplin's stint in rehab. Watch a clip of ITN interviewing the group after receiving the award right here.

Keane fans in London should head over here to have a chance to hear Keane's much-anticipated third album "Perfect Symmetry" three weeks before it hits the shops in London on September 25. The event will see the first public playback of the album at a secret location in central London to 150 lucky fans.

Make sure to click here to listen to another new leaked Keane track "Love Is The End." This is a track more along the lines of their previous work and not as new and different as the Bowie-esque "Better Than This." Still very good though. I'm really looking forward to hearing to their fortcoming new album. It might turn out to be one of the best pop albums to hit this year.