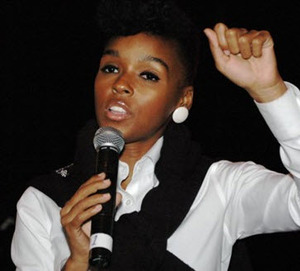 Last weekend, Janelle Monae made a surprise appearance at Atlanta's Black Gay Pride festival that draws African-American gays and lesbians from all over the country. At the opening ceremonies in Midtown's new W hotel, Monae pledged to be a strong ally for black gay men and lesbians, who she called "bold and fearless" for living their lives openly and honestly.

What I find so incredibly refreshing about Monae is that she not only defies musical barriers and industry expectations, but also pro-actively reaches across different groups and demographics to let her music speak to everyone.

Monae performed an acoustic version of the brilliant "Smile," an instant classic from her new EP that prominently displays her pitch-perfect vocals that invoke memories of Judy Garland and Dorothy Dandrich. The singer followed up with an acoustic rendition of "Sincerely, Jane" with the help of a drag queen on backing vocals. It's a must-watch.