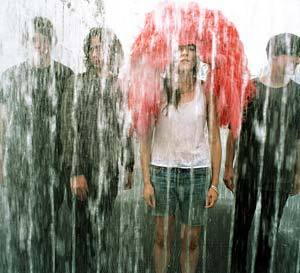 Check out a totally guilt-free download of Stricken City's new single "Los Art" that will be released in the U.K. in November. London-based Stricken City are Iain Pettifer (guitars), Rebekah Raa (vocals/keys), Mike Hyland (bass) and Kit (drums). Iain and Rebekah first met in college where they started toying around with a guitar and an 8-track recorder out of boredom.

Inspired by the alt sounds of The Slits, Life Without Buildings and Young Marble Giants, the band’s "new wave, spiky, jangling pop" found them being asked to play both London’s TDK festival and Vice Magazine’s Tales Of The Jackalope in 2007, as well as earning them support slots with Mystery Jets, Friendly Fires and Love Is All.

In July 2008, the band released their debut AA side single on limited 7” vinyl, via the Adventures Close To Home label (Holy Hail, Free Blood). Both "Tak O Tak" and "Bardou" presented a fresh, shimmering pop that quickly became the talk of the underground town.

"Lost Art" also presents a sound that can best described as crunchy alt-pop that will surely have both indie kids and pop purists dancing.