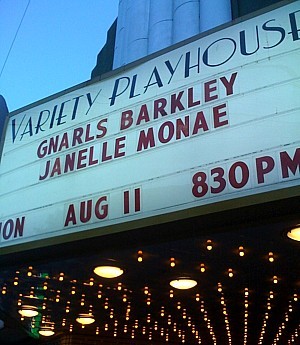 Gnarls Barkley and Janelle Monae brought down a packed Variety Playhouse Monday night performing their unique brand of alternative soul, pop and R&B with an intensity and fervor that hit all the right notes.

Monea kicked off the evening with a spirited, high-velocity performance that included several tracks from her new EP "Metropolis" plus the older track "Letting Go." The Atlanta singer was on fire putting her heart, soul and a whole lot of theatrics into the show. She was kicking around, dancing, prancing, flirting, flaunting, crawling, posing, twirling and head banging throughout the show.

After warming up the crowd with the up-tempo stompers "Many Moons" and "Violet Stars," she toned it down for a brief moment with the beautiful acoustic ballad "Smile." She then kicked back into gear with the powerful and personal "Sincerely, Jane."

The petite singer got the crowd into a frenzy (and making her handlers very nervous) when she jumped into the audience to dance with her fans. Wow. After crawling back on stage, she didn't hesitate and dived right back into the crowd sticking out her tongue and moving over hands like a little snake. This hot, little firecracker who was inspired by Tupac and Judy Garland obviously also has a huge rock 'n roll spirit. Amazing. 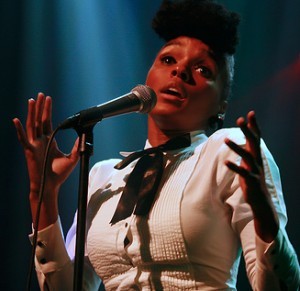 Gnarls Barkley followed the Monea whirlwind. Cee-lo and Danger Mouse were in fine, fine shape. They played all of old and new hits, including "Run," "Gone Daddy Gone," "Going On" and of course "Crazy."  The duo was supported by a fully-featured band including two percussionists.

Cee-lo is quite a remarkable live performer who belts out a soulful tune so effortlessly, so flawlessly. From his early beginning as an Atlanta MC, he has grown into a full-blown rock star. Oddly, Danger Mouse spend most of the show sitting with his side and back to the audience playing the keys only whispering to Cee-lo in between songs. The gifted music is man is a bit of a mystery.

If you want to get a feel of Gnarls Barkley's live show make sure to download their iTunes session that they recorded at the Apple Store in SoHo last month. 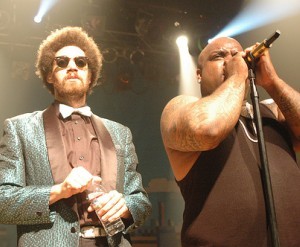