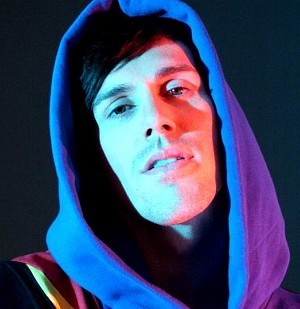 Sam Sparro is one of most exciting new artists to emerge on the scene this year. The openly gay pop singer serves up an utterly delicious, solid and consistent blend of pop, soul and funk that has hit, hit, hit written all over it. It's like Prince, Goldfrapp and D'Angelo rolled into one irresistible package.

His single "Black & Gold" typifies Sam’s signature sound and caused a stir in the charts overseas. His new single "21st Century" is expected to race up the charts as well. Both tracks are taken from his self-titled debut album that is available in the U.S. now.

Sam Sparro spoke exclusively with ArjanWrites.com to introduce himself to audiences in the U.S. and to talk a bit about his new album. We moved from the basics to a chat about being openly gay in pop music, being a role model, his boyfriend, his ambitions, his love for Beth Ditto and his disappointment with Madonna.

Read the first part of the two-parties series after the jump.

You probably started working on your debut album quite a while ago before it really blew up in Europe. For people that are new to you, can you talk a little bit about how this record came about?
Well, I have been writing and recording music for a long time. For almost 10 years I have been doing production and recording stuff. I have been singing for a lot longer. Some of these tracks on the album I have written over the last five years. Some of them I wrote very recently. It is just kind of the combination of the different styles I have worked in over the years. I guess this is really an introduction to me and my music.

What was the creative process like for you making this record? What was your vision?
I mean, I really wanted to figure out a way to make music that incorporated all the things I listened to. You know, I really, really love electronic music and new wave and kind of darker electronic music like that. But it just didn't' really have a lot of soul, especially vocally. I wanted to incorporate my love of soul music, funk, and disco and things like that into the mix. Yeah. I just really just approached it as trying to push things forward  by including things from the past that really inspired me.

Can you name examples? What are some of the artists or some of the styles that have influenced you?
Definitely Prince and New Order and Bjork and Parliament and the Gap Band and Al Green. Early 90's house music definitely was a big influence. Very, very all over the place. I mean, Kraftwerk was a big influence. Grace Jones. Al Green. I mean it is very, very all over the place.

So did you always want to be a singer? You've also been producing and you were also an actor.
True. But singing has always been my passion. I started out very very early as a singer. I've been recording and singing since I was about 10. But then it became more about music as a form of self expression and I wanted to write and create my own music and be in control of the things I was saying, expressing and arranging. So for me, I just love doing it all. I love the process of creating something from nothing and singing it and performing it, you know?

One of the stand out songs for me on the album is "Pocket." It's packs a very strong message.
It does. It is a song that is about living in a country where people, especially in politics, are very homophobic and regard gay people as second class citizens. The line I wrote about that was:

"It's a life in color, not black and white, but some people think they're the ones who got it right. But in a room so full you have to be a little more flexible."

I think people need to be a bit more tolerant and flexible and try and see other people's points of view.

How important was it for you to be an openly gay, "out" singer?
Well, it was very important. I just find it a shame that so many gay people feel ashamed of themselves or feel uncomfortable with sharing their real identities with the world. I think, America in particular, definitely has a lot of issues with sexuality. It is one of the most homophobic countries I have ever lived in. I think it is harder in this country. But I think the way to move things forward is to be open and honest and to be real. So it was important to me to really represent myself so that younger people could see or be inspired to be proud of themselves and be comfortable with themselves and live an honest and open and happy life, you know?

It seems like openly-male gay pop artists have a much harder time to break through in America than in Europe. Scissor Sisters come to mind.
Definitely. I think American culture in general is a lot more machismo, a lot more macho, a lot more....I don't know. It is just not as progressive for some reason. But, you know. I live in Los Angeles. I live in one of the most creative parts of L.A. and it is a very progressive neighborhood. Everybody is welcome here where I live. It is very mixed area. There are all sorts of different people. That is kind of how I prefer to live.

And you are in a very steady relationship, right?
Yes. For two years.

Has it been challenging for you to be in a relationship and going through all this whirlwind of fame that you are in right now? I am sure you are traveling a lot and away from him. What is your secret to keeping that a healthy relationship?
Well, I think this relationship is challenging enough anyway, but I think I would be having a lot harder of a time if I didn't have that support. We have been traveling together actually, so there isn't a lot of distance involved, which is good. He has been traveling with me and we work together. He styles me and styles the band and is very involved in the visual creative process. It is challenging, but we just keep pushing through I guess.

When you are one of the few openly gay pop artists, you automatically become some sort of role model. How do you feel about that? It is not something that you chose to be, I think.
No, I didn't really chose to be a role model. But when I was growing up there weren't a lot of gay people to look up to that were cool, that were young, that were interesting, that I wanted to be anything like. So it is very flattering and I am happy that people see me as somebody to look up to, you know? It is very flattering.

Look for Part 2 of Arjan's interview with Sam Sparro tomorrow.