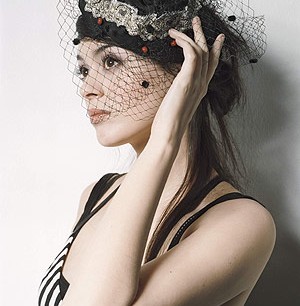 Eccentric French chantreuse Emilie Simon is coming to America and has a little gift for ArjanWrites readers. Check out her heart-stopping cover of Bowie's 1969 classic "Space Oddity" that you can have totally guilt-free. It's a fine piece of art that does the phenomenal original fully justice. The tune first appeared on a French David Bowie tribute compilation that was released in Europe in 2007.

Hailing from Montpellier, Emilie Simon is considered one of France's most innovative new pop artists. Simon is a multi-talented singer who wrote produced, arranged and performed her most recent album "The Flower Book." Simon is performing shows in Los Angeles and New York in September and October to play tracks from her forthcoming new disc.

Simon's atmospheric pop is somewhat reminiscent of Imogen Heap and Bjork but totally stand on its own with the songstress unique, high-pitch delivery.  As clearly shown by her cover of "Space Oddity," Simon creates her distinct sound by mixing and mashing a lot of different instruments and soundscapes. Her knack for sonic experimentation should comes as no surprise as she is the daughter of a sound engineer and has been around recording equipment and soundboards ever since she grew up.