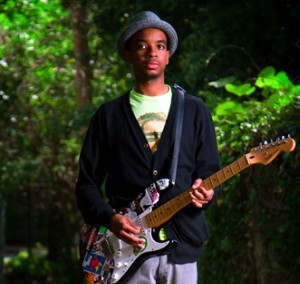 There are not a lot of artists that actually define what this blog is all about. Artists that are both sweet and cruncy. Music makers who come from a familiar place but take their sound to a new level that is exciting, new and has a bunch of crunch. They remix the past and bring their own original point of view that makes you stop and listen. Chester French and Janelle Monae are some of the artists that recently gave me that feeling.

And now there is Spree Wilson.

Utterly humble and down to earth, the Nashville native rocks the stage with his quirky rhymes and an energetic stage show. I saw Spree perform in Atlanta on Tuesday together with some of the other Radiant Kids, a troop of emerging MC talent. I truly enjoyed his performance. It kicked off with a jam session with his insanely good drummer Alien who took the set into another stratosphere. He hits the cymbals like Hendrix touched his snares with a passion and precision that is infectious.

Spree played familiar tracks like "Dreamworld" (MP3) and "Bring Me Down" and mixed it with one his new joints, titled "Words," which was produced by Kanye West's mentor NO.I.D. The track was intended for Lupe Fiasco, but Spree took first dibs and ran with it. This synth-driven tune might be a bit out of the scope of Spree's canon, but what I find so compelling is that this MC with a guitar does not feel limited to one certain mold. "I'm just a mistfit with some bright ideas," he rightfully proclaims in the song.

I'm comfortable boasting when I believe somebody is the real deal. And Spree is just that. Sweet and crunchy with a style of his own. I'm stunned this guy is not signed yet. All you Interscopes and Atlantics of this world should wake up and smell the music. It's a new day.