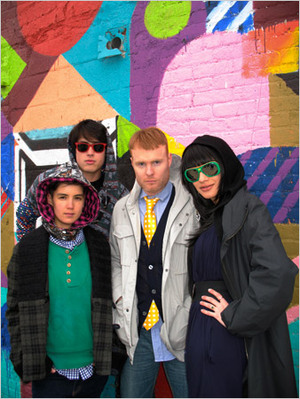 While on the topic of dance music and Hercules & Love Affair, head over to the New York Times web site to read an interesting background feature about Andy Butler's disco project. Butler talks specifically about his hit single "Blind" that features his pal Antony Hagarty.

"'Blind' was about growing up a gay kid, my immediate family and social group rejecting me, and asking why I was born into this situation," he writes The New York Times in an e-mail message. "But knowing that as soon as I could escape, I would, and that I would find freedom and solace (. . . ) As an adult, however, I found a life full of excess and other wounded people and confusion. Thus, I felt blind."

Fellow producer Justin Wang comments, "With 'Blind' I thought: 'Hit, hit, hit! Queer, queer, queer!' (. . . )The voice of Antony is so undeniably queer. It's so melodramatic yet expressive, and clearly not belonging to any normal heterosexual, macho male. To put that over a disco beat, it’s like Sylvester meets Ute Lemper. It's a perfect pop combination."