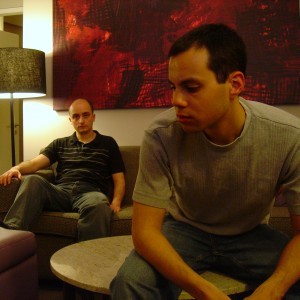 Fans from Keane, Coldplay and other wistful Brit pop should check out British newcomers Templescene. They are the duo of Philippe Rose and Ric Levy who "have been lucky enough to watch and learn from some of the great musicians of our time," according to their web site.

They started off making the tea and worked their way up until they had engineered for the likes of Korn, Eric Clapton and Dave Matthews Band. But after learning from the best, they picked the the mic and instruments, and started recording their own tunes.

They have released two EPs, titled "Another Town" and "Sektor," which are available on iTunes UK. Download a guilt-free MP3 of their tune "First Day," a  multi-layered, atmospheric pop gem. Very pretty.