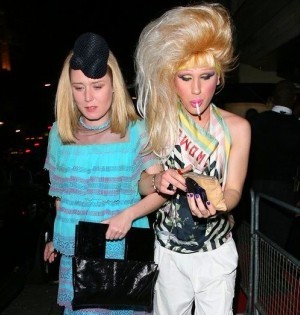 This picture tells a thousand words

Harsh wrote on her MySpace page that she will have a role in the video for Murphy's new single "Movie Star."

"Yesterday myself and a gaggle of London's finest performance artists, dressed-to-kills and club personalities filmed the video for Roisin Murphy's latest single, Movie Star,'" she writes.

"I don't want to reveal too much about the video to save being skinned alive by Roisin but it involves me playing the role of Roisin's mother and it's reminiscent of John Waters' work with Divine. You'll see what I mean soon when it's released."

Sounds very exciting. Make sure to mark July 7 on your calendar as a day to remember. That's the day "Movie Star" will be released according to the Roisin Murphy fan blog.