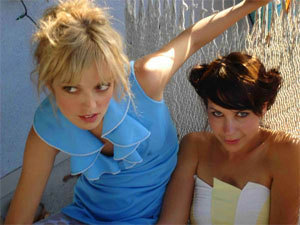 Electrocute's new single "On The Beat" is a cute little nod to The Go Go's who must have inspired this totally fun new track. Written by the duo's founding member Nicole Morier and produced by Dutch DJ/producer JunkieXL, "On The Beat" is taken from the group's new digital EP that is available on iTunes now.

Morier founded Electrocute back in 2002 when she met former band member Mia Dime in Berlin's bustling avant-garde electro scene. After releasing some demo material and touring with Peaches across Europe and Australia, Morier decided to call it quits and focus on her songwriting career back home in Los Angeles. Most recently, she wrote tracks for Britney Spears, The Bird & The Bee and JunkieXL's latest album.

But Morier couldn't resist singing and performing, and resurrected Electrocute together with her new pal, sassy Aussie Legs Le Brock. "On The Beat" is one of the six tracks on this new EP that is filled with spunky California surf pop with its rooving electro dance beats, swaggering fuzz fueled guitars and sugary vocals.
(Click here to download Electrocute's "On The Beat" EP on iTunes.)