arjanwrites.com: Listen to Carolina Liar "Show Me What I'm Looking For"

Listen to Carolina Liar "Show Me What I'm Looking For" 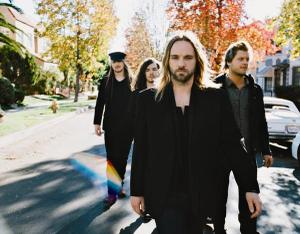 The music from Swedish American pop-rock outfit Carolina Liar was featured on MTV's pseudo reality soap "The Hills" this week. "Show Me What I'm Looking For" is a catchy slice of pop rock with a bit of a Max Martin twist.

Carolina Liar is fronted by singer/songwriter Chad Wolfe who has been playing the Los Angeles coffee house circuit over the past couple of years and now finally has a shot at chart success. After moving to California from his hometown Charleston, SC, Wolfe worked lots of odd jobs to give him some helpful music industry contacts. He worked as an extra on a Celine Dion video, cleaned toilets in exchange for studio time, interned with Diane Warren and turned a house sitting gig into a friendship with none other that Swedish master producer Max Martin.

Martin invited him to move to Sweden for a little while to hone his songwriting skills. The singer explains in a recent interview that Martin taught him the importance of creating melody to craft good pop. "Melody is so important and it’s classical in some sense. You approach things in that way and you don’t have the liberty to sing a blues riff in something," he says. "You would stick to the melody and there’s a law to sticking to the melody. We stuck to these simple melodies that would go over major/minor chord changes. The song would be written in minor, but you would be singing over it in major. You can pull on these different types of emotions and these things I never really even thought of before."

Wolfe teamed with some people in Martin's posse to from Carolina Liar. The band's debut album, titled "Coming to Terms," is due in June on Atlantic Record. The group's first single "It's Not Over" and "Show Me What I'm Looking For" are available on iTunes now.