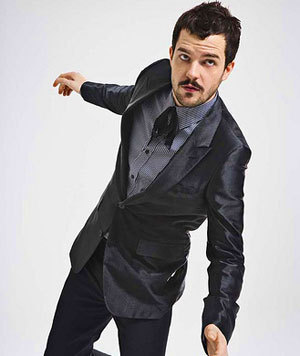 The rumor that Stuart Price will be producing The Killers' third album was finally confirmed by Brandon Flowers in an interview with British music mag NME this week. The collaboration between Madonna's favorite DJ/producer and the Las Vegas foursome has been the subject of speculation ever since Price hinted about a potential partnership when he appeared on Pete Tong's BBC radio show late 2007.

"It’s Stuart Price," Brandon finally reveals in NME. "We learned a lot from him without even meeting him because of what he did to 'Mr Brightside.' He’s very musical. People talk about using the recording gear as an instrument and making it sing and he’s really able when it comes to that. He’s able to give us sounds we want and give us sounds we’ve never hear. Its really inspiring."

The group is currently writing songs at home in Las Vegas and will go into the studio with Price in London this June. They will be playing some of their new tracks at British music festivals later this year, including the Reading Music Festival in August. Price has a busy studio schedule this year. He is currently in Berlin putting the final touches on Keane's new record.

Price working with The Killers is terribly exciting news. It seems to be a bit of a left turn from the alt-rock road they were on. After going Americana with a Bruce Springsteen inspired sound on "Sam's Town" and a dark and crunchy duet with Lou Reed on "Sawdust," Stuart Price might return The Killers' sound to the synth-driven new wave pop that marked their debut album. Who knows. Brandon might even bring back that hot little number and some fresh, new eyeliner.