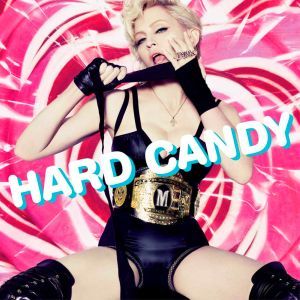 Strangely, album opener "Candy Shop," (almost identical to the version that leaked online a year ago), is one of the album's weaker tracks and doesn’t bode well for the rest of the 12-track set. Still, any song with Madonna making smutty double entendres out of lyrics as knowingly silly as "I got Turkish delights" can’t be taken too seriously.

On track two the big guns (or should that be "gums"?) are wheeled out. While "4 Minutes" is a virtual join-the-dots exercise in how to make an American hit, circa 2008, it’s undoubtedly a grower. With so many busy elements (those blaring horns, the cutesy banter trading with guest star Justin Timberlake – relegated to a "featuring" role in the credits – and Timbaland hovering close by) "4 Minutes" succeeds on a number of levels. It's not Madonna’s greatest single ever, and one that will no doubt age very dis-gracefully, but the best track to right US chart wrongs. Want proof? This week "4 Minutes" soared to #3, handing Madonna the honour of now being the artist with the most top ten hits in the US – edging past Elvis Presley. Tick-tock, tick-tock indeed!

Thankfully, the record's tasty triple selection of tracks 3-5 are all prime examples of what Madonna does best – memorable pop with great choruses that’ll ricochet globally for months to come. If you’re looking for singles #2, #3 and #4, here’s your one-stop Candy shop.

"Give It To Me" is Confession’s "Get Together" cleverly remodeled in the winning electro-funk style of her classic 1983 breakthrough single "Holiday." Pharrell Williams must have been itching for years to upgrade that particular Madonna standard and may well have just managed too. We’re guessing a sure shot heir to "4 Minutes."

That’s followed by "Heartbeat," the most "traditional" Madonna song here. Not only is it yet another ode to getting down – "when I dance I feel free" – in the finest Into The Groove tradition, but boasts a chorus as sweet as, well, candy. Fans have been waiting decades for Madonna to utter a line as club-friendly as ITG’s "only when I'm dancing can I feel this free" and Heartbeat’s "see my booty get down" is a fitting, albeit bootylicious, successor.

Finishing off the delicious trifecta is "Miles Away" – sweet urban pop with an undercurrent of melancholy and unmistakable echoes of Nelly Furtado’s "Say It Right." It’s a poignant tale of being far from the one you love and hints at what might be going on in Madonna’s private life. For someone who’s long crafted her musical art from personal experiences, "Hard Candy" is almost devoid of that usual frankness and "Miles Away" might be the only crack in the façade we’re allowed to view this time around. Or perhaps she left that all for the punchy cover shot?!

Next up is "She’s Not Me" – a snippy, bitchy, catchy disco groover that appears to be the Queen of Pop taking direct aim at her competition. Yet with so much early promise it’s tragically let down with an unfortunately bombastic middle section. From then on it just gets messy as spooky, swirling noises throb relentlessly throughout, giving the impression Pharrell fell asleep on the mixing board while the track was still running.

That’s the biggest complaint for the rest of the album – so many of the songs have great potential, yet end too raw and unfinished. From the middle onwards "Hard Candy" is definitely more miss than hit. It’s a bit like sticking your hand blindly into the candy jar and coming up with trick after trick when you keep hoping for a treat.

Of "Incredible" the less said the better. Suffice to say it in no way lives up to its name. “Sex with you is incredible” is one of the few remarkable lines uttered during this quite unremarkable track.

"Beat Goes On" is significantly different to the version that also leaked last year. It’s yet another tribute to dancing, with more of an early 80s vibe, and at first seems like the perfect blend of old skool Madonna with new skool grooves. After a curt Kanye West rap in which he mentions "doing F," whatever that may be, things once again dissolve into a meandering mess. The chorus is brazenly forgotten about, spoiling what could easily have been another Madonna classic. On and on it does indeed go.

"Hard Candy" is redeemed at this point by "Dance 2night" – with the Timbaland/Timberlake duo close by once more. Harking back to mid-80s Janet Jackson with its jaunty freestyle R&B approach, it sports a brain-hugging chorus that could easily have been stolen from some boy band archive. Hmmm, now who could be responsible for that?

Track ten, "Spanish Lesson," is mercifully short. Guess what? There are more references to the dance floor, a Spanish guitar tossed in, alongside some plodding beats, and it’s all over so quickly it barely rates a mention. Ho hum.

The closest thing to a ballad on the album is "Devil Wouldn’t Recognise You" where Justin once again makes his presence felt double-tracking Madonna. With echoes of JT’s own "Cry Me A River," it proves to be yet again a decent pop song left wanting under the weight of the “everything including the kitchen sink” production approach.

Finally, "Hard Candy" comes to a haunting end with "Voices." Cue Justin uttering the opening line: “who is the master, who is the slave?” Well, that certainly gives us plenty to ponder! Over a moody, mid-tempo beat "Voices" comes on like a veritable act of contrition for what has essentially been a collection of confessions on a urban dance floor.

Overall "Hard Candy" is patchy, but blessed with a handful of great singles (which is what you’d expect from any Madonna album) that stick close to the winning formula of keeping the most recognisable voice in pop uncluttered and out front. It’s when she’s tossed boxing gloves first into the mix, along with all manner of production pots and pans (a case of too many cooks perhaps?) that "Hard Candy" goes a tad sour.

Expectations-wise, file "Hard Candy" alongside 2000’s inconsistent "Music" album – which suffered coming post-Ray Of Light and delivering a truly killer lead single that promised too much. Likewise, beyond the handful of obvious singles, things start to get somewhat sticky on "Hard Candy."

As it is, it’s a sweet enough treat with just enough for longtime Madonna fans to cherish, or (ahem!) get their teeth into. And for those who suspected Madonna was well past her use-by-date in her 50th year, it’s mostly a timely reminder she’s still got a lot more than just "4 Minutes" to save the world’s charts with.

Marc Andrews is a media and entertainment journalist who writes for MEDIAWEEK magazine (www.mediaweek.com.au) and DNA Magazine (dnamagazine.com).