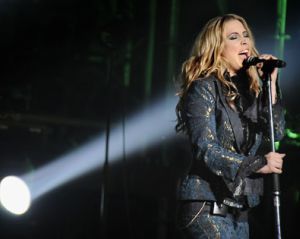 Anouk was on fire this weekend.

The Dutch singer performed two sold out shows at the gigantic Gelredrome Arena in The Netherlands and received overwhelming praise from critics and fans for her hard rocking show. The set list featured all of her older and more recent hits, including "Nobody's Wife," "Good God," "So Hard," "I Don't Wanna Hurt" and "R U Kidding Me." Due to the success of the shows, a rumor is floating around that Anouk will be playing an additional arena show in the near future.

There's some good news for her international fans as well. The rock chick is getting serious about making a knock out impression in North America. She spent some time in Los Angeles early March to record a video for her new single "Modern World." It was directed by Melina Matsoukas, a famed director who recently shot videos for Kylie Minogue ("In My Arms" and "Wow") and Leona Lewis ("Bleeding Love"). Matsoukas is currently working on two new videos for Madonna. (Click here to download "Modern World" on iTunes USA.)

Stream "Modern World" in the music player below. Featuring her larger than life vocals, the bluesy tune captures Anouk's unbridled and unambiguous view of the modern world we live. "Crazy way to get your kicks, shoot the silicone in your lips. If your figure makes you sad, they suck the fat right of your back," she sings. "These days adoption is a hot thing, you can get a child for nearly nothing. You take them home to a nanny, buy off your guilt with toys and candy."

That's Anouk. Telling people like it is. You gotta love her.