« Video Premiere: Private "We Got Some Breaking Up To Do" | Main | Kylie Minogue Releases New U.S. Single » 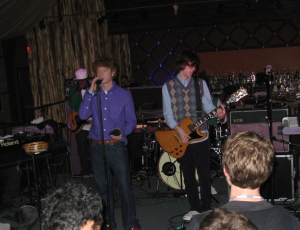 Last night, Chester French performed one of their first-ever live shows at the SXSW Facebook Party in Austin, TX. A member in the crowd shot the candid posted above with D.A. (left) and Maxwell (right) appropriately dressed in Harvard chic. Michael saw the group play as well and commented, "Awesome live show," on Twitter.

Also, the peeps at MTV are paying attention. They just named Chester French one of the fresh new acts to look out for at SXSW. Chester French will be playing more shows in Austin this week, including Perez Hilton's blow-out party together with Robyn and N.E.R.D. on Saturday. For dates and music, head to their Myspace page.