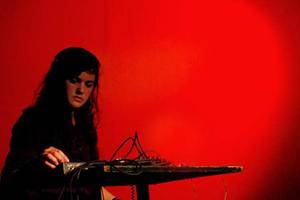 For my final post as guest blogger, I thought I’d share with you some musicians I love, all of whom have new albums on the way in 2008. I just noticed the majority are female singers… but at least there’s one guy!

Emiliana Torrini - She’s in the midst of writing and recording her new album - VERY exciting. Her voice is so unique, it just makes me happy. Her last album ‘Fisherman’s Woman’ is a favourite on my iPod. We became friends in 2007 and my most lovely memory of her is from Los Angeles in June when she came to our Temposhark show and gave me a white rose as a gift, making my night even more special!

Sam Sparro – My producer Sean McGhee told me about Sam but I don’t know too much about him yet. I like the original version of his song ‘Black and Gold’ which you can hear on his MySpace page. He sounds a bit like D’Angelo meeting electro-era Goldfrapp in a dark alley.

Julianna Barwick (photo with this blog) - Guy Sigsworth introduced me to the beautiful music of this equally beautiful New York based singer. Her mini album Sanguine is made up of zillions of loops where Julianna’s short vocal phrases become a one-woman choir. Her live performance in London last October was just SOOOOO good! Her influences range from Björk and boy choirs to Panda Bear and Thom Yorke. If you like Animal Collective, you'll surely like Julianna too. Download a free live session she did for the cool radio podcast Má Fama - it's the show dated 13th November 2007.

Kate Havnevik – Kate’s album ‘Melankton’ spent a lot of time on my stereo in 2007, so I’m really excited she’s currently recording her second album in Norway, Poland and London. I believe she is producing this next record herself but as always, she’s collaborating with some super talents. Catch her video blogging from her studio over at YouTube.

Like An Icon - If you, like me, are intrigued to hear the new hip hop influenced Madonna album, then I recommend reading a new book all about her music written by Lucy O'Brien. This book stands out from previous Madonna biogs because its main focus is on her actual music rather than delving too much into her personal life. It has insightful behind-the-scenes interviews with musicians, producers, dancers and directors including one I did for the book when I was in New York with M’s old stylist Maripol, who was responsible for Madonna's early image and rubber crosses. She told me lots of cool stories about late 70s/early 80s Manhattan working alongside Warhol, Jean-Michel Basquiat, Keith Haring and Blondie. You can pick it up now at a bookshop near you or Amazon UK and USA.

Laura Marling – Laura is a young British singer (she's only 17 I think) who recently signed to Virgin records. She was on Later with Jools Holland and I fell in love her song ‘New Romantic’. Her first album 'Alas I Cannot Swim' is released on 4th Feb in a unique Song Box format containing the CD album, exclusive concert ticket and set of album mementos. Gotta be good!

Map The Music - an indie documentary film following musicians around the USA on tour including Imogen Heap, Rachael Yamagata, Kate Havnevik, and even Temposhark. I haven’t seen any of the footage yet but I know we all had a lot of fun filming it. An early preview trailer is up now, while Sam Hale and her team finish editing the film.

Mirah - I've been a fan of Mirah for years now and am always surprised by what she does next. Her remix album from last year 'Joyride' was amazing. She has 5 albums, on the awesome K Records label, all of which are worth getting. She's a true indie artist with an amazing voice and lyrics. Hear some of her albums at iTunes or find her CDs (and cool Tshirts) at the KRecs.

Lastly, Zero 7 star Sia's new album is streaming at MySpace and she is about to tour in the USA. I like her new song with Beck called 'Academia', plus she's covered The Pretender's classic 'I Go To Sleep'. I also used to be mad about her song 'Fear' from her debut album 'Healing Is Difficult'.

Right that's it from me! A big thanks to Arjan for asking me to contribute, I’ve really enjoyed it… Happy new year, sending you much love for 2008.