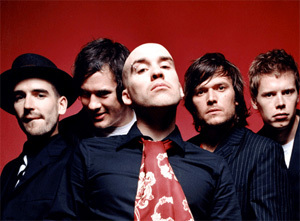 Two years after The Infadels first hit the pop scene with their debut LP, the British outfit finally releases new music in anticipation of their forthcoming sophomore record "Universe In Reverse." Head over to their web site to download a guilt-free MP3 of their new track "Play Blind" to get a taste of their new record.

The Infadels' new record was entirely produced by Martin "Youth" Glover (U2, Client, Erasure) who added a leaner rock edge to the group's punktronica. But judging from "Play Blind," the group's signature sound stays fully intact with its swirling synth, jagged melody guitars, tight beats and a hard-driving chorus that burst with energy. Highly recommended.