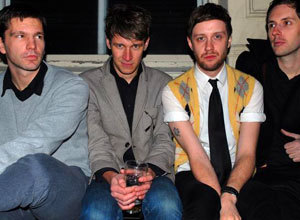 Newcomers The Gadsdens like to describe their music as "Tracy Chapman on uppers and Stevie Nicks on downers," and that's a pretty good way to sum up their sound. The Gadsdens combine melodic sensibilities with a heartfelt delivery that results in poignant pop music that will move you.

Core members of this London outfit are Jody (vocals, guitar) and Simon (sax) who turned their friendship into a musical partnership in 2006. Freelance musicians that have contributed to The Gadsdens since then include Drew Wilson (lead guitar),David Roman (drums), Dan Moder (engineer) and Barney JC (production).

Their MySpace page lists artists like Tori Amos, R.E.M., Sufjan Stevens, The Carpenters and PJ Harvey as some of the people that have influenced them. The Gadsdens also remind me of Passenger with Jody's idiosyncratic crooning and the group's wistful melodies.

Listen The Gadsdens' "The Sailor Song" in the player below. It is an epic slice of wistful Brit pop with its sweeping piano riff, glowing strings and Jody's emotive, vibrato vocals.  Head over to their MySpace page to also hear and download the tango-inspired "Stalkers' Tango" and the gorgeous cover of Bronski Beat's classic "Small Town Boy" that will give you goose bumps. Also, check out one of their newer tunes, titled "Trouble In Paradise," which is a more elaborate, layered production.

Download a free MP3 of "The Sailor Song" on The Gadsdens' MySpace page.